Oldest artifact ever found in Eurasia, an elk tooth pendant, discovered in Altai 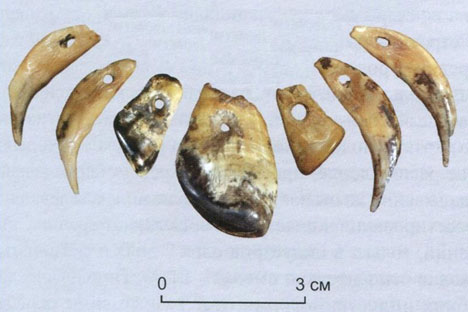 The artifact is at least 40,000 years old, and perhaps much older. 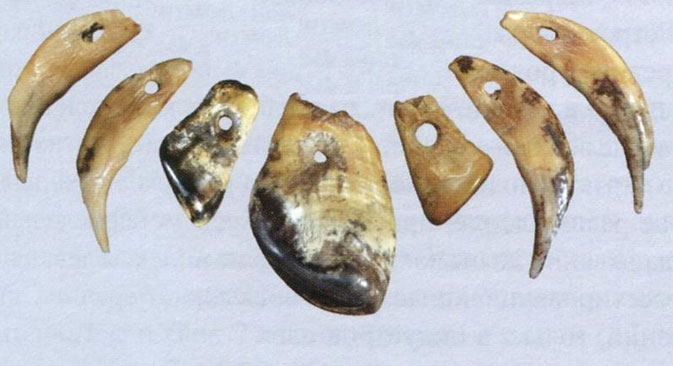 The pendant of elk teeth found in Denisov cave. Source: Institute of Archaeology and Ethnography

The most ancient artifact ever found in Eurasia was discovered in the Denisov cave in Altai Territory in early February 2015, says Science in Siberia magazine, which is published by the Siberian branch of the Russian Academy of Sciences. It is a pendant of elk teeth. It is at least 40,000 years old, and likely much older than that.

In 2010 the remains of a kind of people previously unknown to archeologists were found in the Denisov cave. In addition to these Denisov men, Neanderthals also lived here.

According to Andrei Krivoshapkin, a researcher at the Institute of Archaeology and Ethnography at the Siberian branch of the Russian Academy of Sciences, it is the earliest such artifact ever discovered in Eurasia. According to him, ancient people would wear such pendants for a specific reason.

"One of the hypotheses of why art appeared was that it provided identification of a person as a member of one or another group,” said Krivoshapkin. “However, the sense of beauty cannot be ignored."

So far, he notes, there is no clear idea about when modern man appeared in the Altai region.

Siberian researchers consider the discovery of this pendant the most important scientific find of the season.

Based on a story originally published by Interfax.

Read more: Ancient petroglyphs in the Russian North covered with a glass dome>>>