Yelena Isinbayeva ready to return to pole-vaulting after giving birth 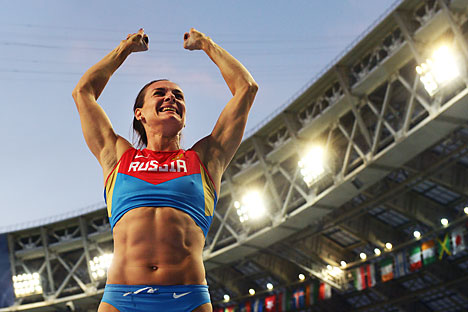 Russian pole-vaulter, two-time Olympic champion and current world record-holder Yelena Isinbayeva is set to return to the sport after becoming a mother.

Isinbayeva will make the announcement at a press-conference in Moscow on Feb. 12, reports RIA Novosti.

After triumph at the World Athletics Championships in Moscow in 2013, Isinbayeva decided to take a break in her career and become a mother. In June 2014 she gave a birth to a daughter.

Isinbayeva wraps her goodbye in gold

In 2013 the Russian said that she was not sure whether she would be able to return to the sport. 'If I can get into the right shape and be absolutely sure that I can compete for a gold medal in Rio [at the 2016 Olympics], then I will be back," Isinbayeva told R-Sport.

The Russian was an Olympic gold medalist in the pole vault at Athens 2004 and Beijing 2008 and won bronze in London in 2012. She is also a three-time outdoor world champion and a four-time indoor champion.

The 32-year-old has set a total of 28 world records. In 2005 she became the first ever woman to exceed the 5-meter mark for a vault. Her current records are 5.01 meters indoors and 5.06 meters in the outdoor event.