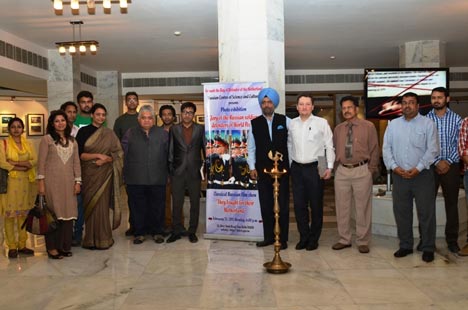 The Day of Defender of the Motherland was marked at an auspicious function at the Russian Centre of Science and Culture (RCSC) in New Delhi on February 23, 2015.

The Day of Defender of the Motherland was marked at an auspicious function at the Russian Centre of Science and Culture (RCSC) in New Delhi on February 23, 2015.

The programme comprised a Photo Exhibition “Glory of the Russian soldiers—Defenders of World Peace” and the screening of a classical Russian film “They Fought for their Motherland”.  The photos on display included images of military operations, week-day service officers and men of various arms of the Russian Federation: CB, Air Force, Navy, Strategic Missile Forces, as well as a number of Special Forces. Based on the novel by M.A. Sholokhov, the film is a Mosfilm production, and scripted and directed by Sergey Bondarchuk.

Recalling the immense sacrifices made by the heroic soldiers in the Great Patriotic War (1941-1945), Major Dalbir Singh, himself a soldier, who saw actions in the 1965 and 1971 wars, said that it is the noble duty of a nation to respect the soldier who defends his country’s honour and sovereignty at the cost of his life, and in that respect one has to salute the Russian Government. The significant contributions made by both the Red Army of the erstwhile Soviet Union and its people in erasing fascism from the face of earth is worth recalling for generations to come, he added. Tracing the genesis of the Day of Defender of Motherland, Major Dalbir Singh noted that February 23 was declared as a National Holiday by a Decree of the Government of the Russian Federation. Till that date ever since February 18, 1918, the occasion was marked as the Day of the Red Army.

Ms. Purnima Anand and Mr. Vimal Mehta lauded the fortitude and heroic deeds of the Soviet Red Army and sacrifices and sufferings of the Soviet people which commanded tremendous compassion, sympathy and support of the entire mankind.