Interfax
Interfax
Anna Duritskaya, a citizen of Ukraine, who accompanied politician Boris Nemtsov at the moment he was killed in the early hours of February 28, says she did not see the assassin because came from behind.

Anna Duritskaya, a citizen of Ukraine, who accompanied politician Boris Nemtsov at the moment he was killed in the early hours of February 28, says she did not see the assassin because came from behind.

"I don't know where the assassin came from. I didn't see because it happened behind my back," Duritskaya said by Skype on Dozhd television.

"I don't know where he came from, he was behind my back," Duritskaya said.

She also said no one had any reason to kill the politician out of jealousy. "I don't believe there can be such [a reason]," Duritskaya said on Dozhd television on Monday. 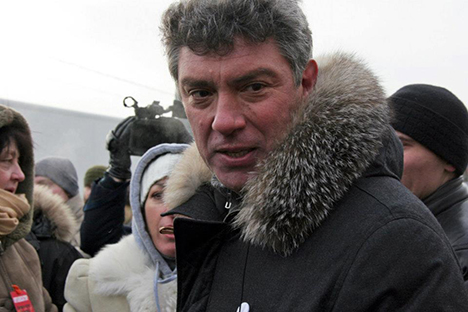 Duritskaya added that neither she nor Nemtsov have ever received such threats.

Duritskaya said she will not be able to attend Nemtsov's funeral. "I can't come out. I probably won't go," she said. She said she had known Nemtsov for three years.

After that, Duritskaya said she could not continue the conversation because she was leaving to meet with an investigator.

"It's abominable to use tragedies such as the awful killing of Boris Nemtsov for attempts to replace investigative and judicial bodies by suggesting openly politicized, unproven and provocational interpretations," Lavrov said at the 28the session of the UN Human Rights Council in Geneva on Monday.

"This dirty crime will be investigated according to the entire strictness of the law so that the culprits cannot avoid liability," Lavrov said.

Lavrov said Russian President Vladimir Putin "immediately gave all necessary orders and they have been taken under special control."

Nemtsov murder: Shock and condemnation in Russia and abroad>>>

The killing of Nemtsov shocked public figures both in Russia and abroad.