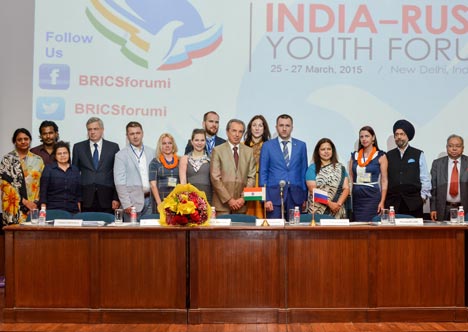 New dimensions of Russian and Indian youth participation in the development of diverse spheres of life of our countries were highlighted at the Russia-India Youth Forum in New Delhi this week.

New dimensions of Russian and Indian youth participation in the development of diverse spheres of life of our countries were highlighted at the Russia-India Youth Forum in New Delhi this week.

The forum organised at the Russian Centre of Science and Culture (RCSC) focussed on key issues like promoting business ties between Russia and India, cultural exchanges and service sector training to generate employment in our countries.

The forum was organised in commemoration of the 70th Anniversary of the Victory over Fascism in the Great Patriotic War (1941-1945).

Chairman of the Russian Union of Youth Pavel Krasnorutskiy headed the Russian delegation to the forum. President of the International Federation of Indo-Russian Youth Clubs Purnima Anand made the introductory remarks.

Addressing the Inaugural Session, the Chief Guest Rajiv Pratap Rudy, Minister of State (Independent Charge) for Skill Development and Entrepreneurship, Minister of State for Parliamentary Affairs, Government of India, referred to the vast potential of the youth who could make considerable contributions to the development process of our countries. “Indian Youth Forum is a partnership forum that is going to herald a long and mutually-rewarding relationship of the future cooperation between India and Russia”, he said. The Minister appreciated the efforts of the organisers in the holding of such a forum. Sharing his impression on the efficiency of Russian defence equipment, he, a pilot himself, cited his personal experience of flying the SY-30 MKI fighter plane for about 40 minutes at the Aero India Show at Bangalore sitting in the pilot’s seat.

Meenakshi Lekhi, M. P. (Lok Sabha), spoke on the relevance of BRICS particularly in terms of youth tie-up in the nation-building activities. She made a stress on the activities pertaining to alleviation of poverty, fighting domination of the few and sharing responsibility. Pinpointing the significant relevance of Russian technology, in the skill India, clean India and Make in India campaigns, with particular emphasis on Ind0-Russian youth cooperation. She assured all support from the Government of India side.

“The development of bilateral relations with India is within our strategic focus. Russian Youth Union is ready to actively implement projects and programmes with young people in India. RUY will act as an initiator in major international projects. In this regard, I am confident that the bilateral relations between the youth of India and Russia will bring real results in business, education, science, culture and tourism,” said Pavel P. Krasnorutskiy.

Expressing contentment over the steady progress in Russian-Indian youth cooperation, Sergey Karmalito, Senior Counsellor, Embassy of the Russian Federation in India, underlined three landmark events taking place in the current year: the presence of the President of India Pranab Mukerjee at the Victory Day Parade in Moscow in May, the visit of Prime Minister Narendra Modi to the Ulfa City to take part in the BRICS Summit, and the subsequent Russian-Indian Joint Commission Meeting in Economy, Science & Technology and Defence Cooperation, and the visit of Indian Foreign Minister Sushma Swaraj to Russia  in December.

“It was heartening to see the relationship getting stronger, and we must give it a defined vision to ensure that there is multi-polarity in the world set up,” Karmalito said.

Tatiana Seliverstova, Head of the International Department, RUY, Russia, and General Diector of Eurasian Trade and Investment Alliance, cited the formation of the permanent Russian-Indian Youth Forum in Delhi, and noted that the Russian-Indian Business Centre would be opened in July.

A couple of agreements were signed between the Russian Union of Youth and International Federation of Indo-Russian Youth Clubs.

Major Dalbir Singh, Secretary, AIIC, laid deep stress on the concrete approach to transfer of technology and utilising all available potential of the youth of our countries in the developmental process. Dr. B. B. L. Madhukar, Secretary-General, BRICS Chamber of Commerce & Industry, noted that the common issues of BRICS member-countries could be solved equipped with common aims and objectives being pursued by the youth organisations and their members.

The Plenary Session 1 on Science and Education was addressed by Rajat Thomas, Programme Associate of the Vishwa Yuvak Kendra, Anurag Naidu, Tatiana Perova, Head of the Russian Language Teachers Training Centre, RCSC,  Devika Barman, Representative of the Youth Wing or Russian Compatriots. The Plenary Session 2 on Tourism and Health was addressed by Jasbir Nischal, Secretary, Indian Association of Friendship with Foreign Countries, Olga Lapanovich, and Uman Anastasia from the RUY.

The Chief Guest of the Forum on March 26 Mr. Sandeep Kumar, Minister for Women & Child, Social Welfare, Language, SC & ST, Delhi Government, lauded the consistent efforts of youth from our countries for joint partnership. He suggested to initiate an exchange programme with 50% representation of women and promised to extend support in exploring ways to work out a teacher exchange programme at the school and university level.

Pavel Krasnorutsky in his speech laid stress on building an informal relationship between India and Russia that goes beyond just business collaborations. Tatiana Seliverstova declared that the there would be organisation of events in India on a regular basis and a Business Mission would be held here every two months in which delegates from both countries would participate.

Nirmal Bhatnagar, Head of the Media Department, JIMS Institute, felt the need to organise short-term projects to boost communication and understanding between the two nations. The forum also saw entrepreneurs from both countries describe their projects from the field of medicine, herbal healthcare and water purification and they also invited collaborations for expanding their market in the partner country.

On March 27, the youth delegations from both Russia and India are paying a visit to Rashtrapathi Bhawan and Indian Parliament. On March 28, the delegations would be visiting Agra.