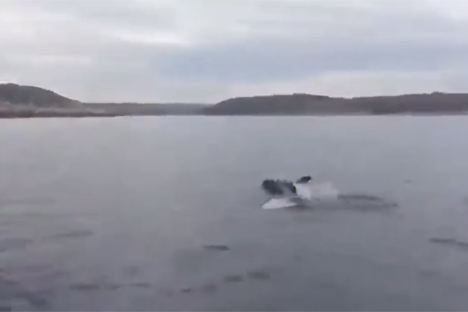 Residents of the Murmansk region fishing in the Kola Gulf in the Barents Sea have videoed a group of dolphins.

Residents of the Murmansk region fishing in the Kola Gulf in the Barents Sea have videoed a group of dolphins.

The recording, which shows dolphins fearlessly approaching an inflatable fishing boat, has several thousand views. Users commenting on the post say they are confident that the appearance of dolphins in the northern latitudes indicates irreversible climate changes.

"It is possible that the dolphins have entered the Kola Gulf for fish to eat," the scientist said, adding that finback whales were driven to the Kola Gulf by herring migrations several years ago. The whales were then seen by people in Severomorsk.

The video taken by the fishermen shows that the dolphins have a clear dorsal fin and their sides and lower parts of their bodies are white. It is possible that the dolphins are Genus lagenorhynchus or white-side Delphinus delphis.

Zabavnikov said scientists will study the video some more to determine the exact type of the dolphins and to determine what precisely food they were looking north of the Arctic Circle.