RIR
Easter services were held on April 12 at the White Hall of the Russian Embassy in New Delhi. 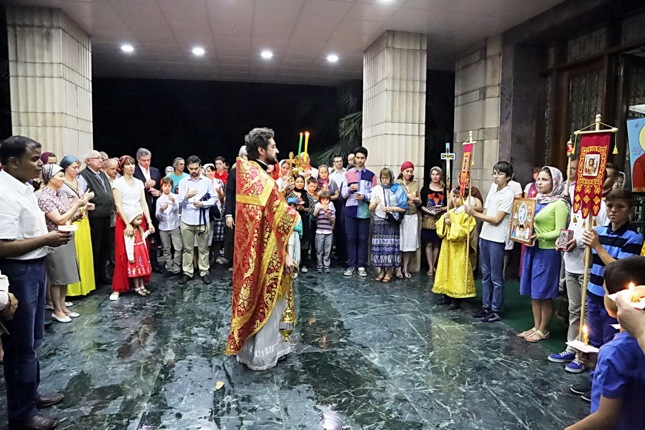 Easter services were held on April 12 at the White Hall of the Russian Embassy in New Delhi.

More than 200 people took part in the services – members of the Russian diplomatic mission and other Russians working in India, compatriots residing permanently in the country, ambassadors and diplomats of CIS countries and a number of other states, as well as Orthodox Indians. Many came with their families and children.

Easter services were held by Abbot Seraphim (Andrey Kravchenko), specifically sent for this celebration by the Moscow Patriarchate of the Russian Orthodox Church.

The showers and thunderstorms in the Indian capital limited the traditional Procession of the Cross. Participants of the services moved into the Embassy’s garden, ​​and under the spacious visor of the building, and here prayers were said, and solemn cries of “Christ is Risen!” were heard.

Easter celebration at the Russian Embassy in New Delhi became a tradition starting in 2003. In 2012, the first parish of the Russian Orthodox Church was officially registered – which bears the name of St. Thomas. The decision to establishment this parish was made in 2006, during the visit of Patriarch Kirill to India, who at that time had the rank of Metropolitan, and served as the Head of External Church Relations for the Russian Orthodox Church. 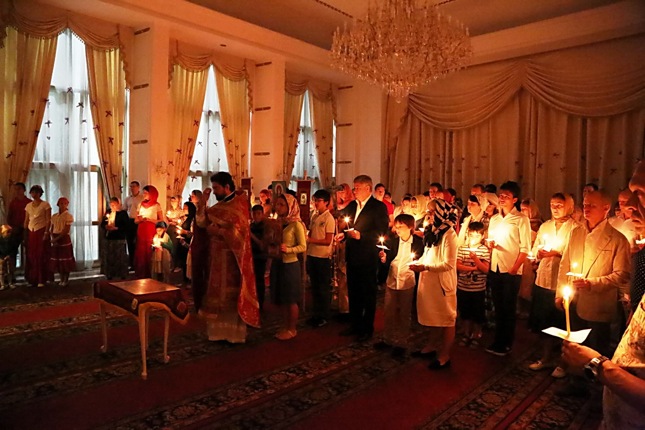 Attending the festive Easter services, Russian Ambassador to India Alexander Kadakin stated that the activities of the Delhi parish had a beneficial effect on the formation of an atmosphere of spirituality, understanding, and tolerance among Russians. The embassy supports the initiative of the Orthodox community in New Delhi to construct, the first on Indian soil, Orthodox Church of St. Thomas, which is expected to be built on the territory of the Russian Center of Science and Culture (RCSC).

Christianity was brought to India in 52 AD by the Holy Apostle Thomas. It is known that a preacher of Russian Orthodoxy in India was Archimandrite Andronicus (Eldipinsky), who had lived in the country for 18 years (1931-1949) and established close ties with local Christians. Today, Christianity in India is represented by numerous Orthodox communities across the country by the ancient eastern Syrian Orthodox Church, supporting sisterly relations with the Russian Orthodox Church, as well as a small mission of the Greek Orthodox Church in the state of West Bengal.