Military parade and marches were held in honor of the 70th anniversary of the Victory in the World War II nationwide, from Vladivostok to Kaliningrad and from Severomorsk to Sevastopol, the Russian Defense Ministry's press service and information department has reported.

Military parades have been held in 26 cities and marches involving servicemen took place in over 150 cities. The main events were traditionally organized in cities where the headquarters of military districts, fleets, and multi-service armies are located. The biggest parade took place in Moscow. It involved 194 units of combat equipment, 143 planes and helicopters, and over 16,000 servicemen. The marching column involved ten manning details of the CIS countries and friendly countries (Azerbaijan, Armenia, Belarus, Kazakhstan, Kyrgyzstan, Tajikistan, India, Mongolia, Serbia and China).

The parades involved over 2,000 units of armored and motor equipment, air defense systems, rocket and artillery weapons, the combat equipment of the Strategic Missile Troops and the Air Defense Forces. All in all, some 85,000 servicemen took part in the celebrations devoted to the 70th anniversary of the Victory in the Second World War.

In seven cities (Moscow, St. Petersburg, Khabarovsk, Chita, Yekaterinburg, Volgograd and Kaliningrad), over seventy units of historical equipment were used in mechanized motorcades. Among them are the famous T-34 tank, self-propelled artillery systems SU-100, reactive mortars Katyusha, and other equipment preserved by enthusiasts from history clubs.

Russian Air Force aviation took part in the celebrations in 13 cities of Russia (Moscow, Vladimir, Baltiysk, Voronezh, Rostov-on-Don, Sevastopol, Yekaterinburg, Verkhnyaya Pyzhma, Novosibirsk, Krasnoyarsk, Samara, Vladivostok, and Severomorsk) and in three cities of the CIS countries (Minsk, Bishkek and Yerevan). Over 300 planes and helicopters were used in the parades.

Naval parades were conducted in St. Petersburg, Baltiysk, Sevastopol, Vladivostok and Severomorsk. They involved 51 warships of the Russian Navy.

Traditional artillery salute will be given in all cities where the military parades took place on the Victory Day at 10:00 p.m. local time. 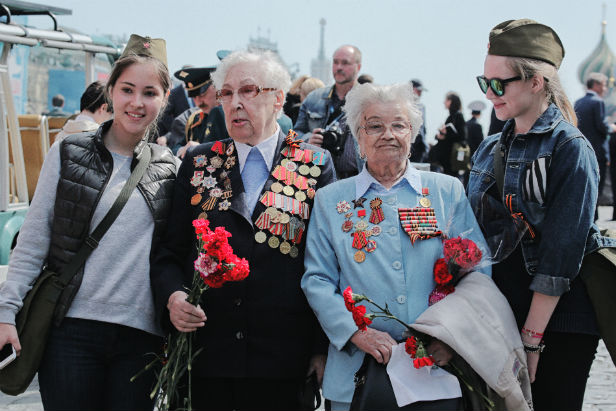