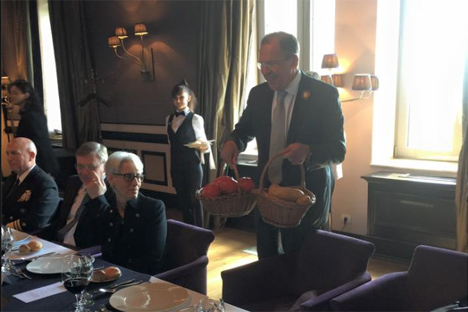 "Sergei Lavrov gave John Kerry Krasnodar tomatoes and potatoes, which are distant relatives of those that his U.S. counterpart once brought him," Zakharova said on Facebook.

Kerry, for his part, "gave Lavrov a list of quotes of Russian media quotes that he believes do not reflect the real potential of the large-scale Russian-U.S. relations, which he believes need improvement," she said.

Almost 1.5 years ago, on January 13, 2014, Kerry gave Lavrov two potatoes from Idaho, U.S. Russian diplomats on the same day asymmetrically responded to the U.S. delegation by giving a pink hat with ear-flaps.

Kerry said he had talked a lot with Lavrov during the Christmas holidays and promised to bring him back potatoes from Idaho. The U.S. secretary of state said Lavrov had promised to him that the potatoes would not be used to make vodka, but would be eaten.

Lavrov later said the potatoes from Idaho would be studied by Krasnodar experts.