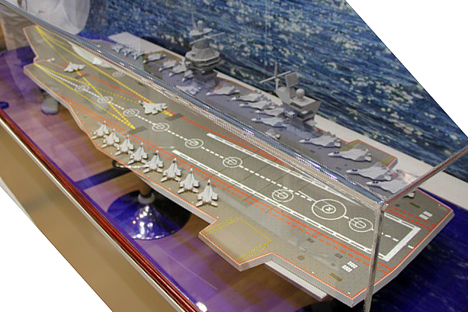 "The ship is tasked to accomplish a variety of missions in remote oceanic areas, strike on ground and seaborne enemy targets by use of its own weapons and seaborne aircraft and protect the airspace," Nplus1.ru has quoted Krylov State Research Center Director Valery Polyakov as saying.

The ship will have a length of 330 meters, a width of 40 meters, a draught of eleven meters and a speed of 30 knots. Its aircraft escort will consist of Mikoyan MiG-29K and Sukhoi T-50 carrier-based fighter aircraft, long-range radar detection aircraft and Kamov Ka-27 multirole helicopters.

Russian Navy Commander Admiral Viktor Chirkov said earlier that a next-generation aircraft carrier was being designed for the Russian Navy.

At present, Russia possesses one aircraft carrier, the Admiral Kuznetsov.