Half of Russians know Hillary Clinton; 17% approve of her - poll 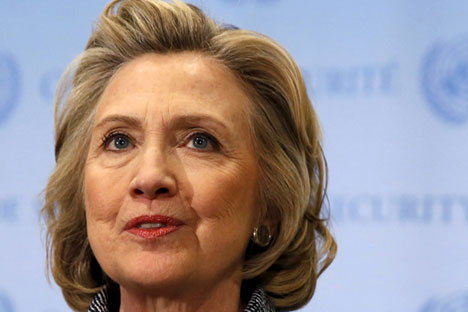 Hillary Clinton is known to half of Russians, primarily, as the former first U.S. lady (26 percent) and as the U.S. presidential candidate (19 percent), VTsIOM said. .

Hillary Clinton is known to half of Russians, primarily, as the former first U.S. lady (26 percent) and as the U.S. presidential candidate (19 percent), VTsIOM said.

Yet another 9 percent of respondents cannot tell exactly what Clinton's job position is, though they know she is a U.S. politician. Three percent of Russians remember that she was a U.S. secretary of state.

Four in ten respondents (41 percent) learned about Clinton from sociologists during a poll conducted among 1,600 people in 130 Russian cities and towns on April 18-19. Clinton is an unknown primarily to poorly-educated respondents (57 percent) and to Russians aged 18-24 (56 percent).

More than a third of Russians who know about Clinton, disapprove of her (42 percent), 17 percent approve, and 41 percent did not have an opinion about it.

Overall, Russians are either indifferent (38 percent) towards the former first U.S. lady or feel negative about her (21 percent distrust her, 14 percent feel antipathy). Much less often Clinton raises positive emotions such as sympathy (6 percent), respect (6 percent) and hope (5 percent).

Speaking of the prospects for the U.S.-Russian relationship under a Clinton presidency, 34 percent of respondents familiar with her political activity, believe that no major changes will happen if she gets elected as the U.S. president.

Twenty-eight percent of Russians have predicted souring relations and growing tensions, 18 percent improvement, and 20 percent could not answer.