RIR
A seminar to commemorate the 70th anniversary of victory over fascism in the Second World War was organized at the School of International Studies of Jawaharlal Nehru University. 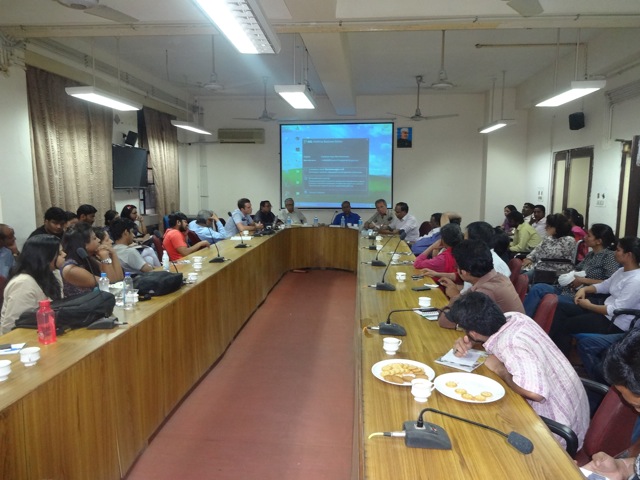 A seminar to commemorate  the 70th anniversary of victory over fascism in the Second World War was organized at the School of International Studies of Jawaharlal Nehru University. JNU professors joined eminent public figures and  Russian embassy representative in New Delhi in addressing the students.

Eminent journalist and weekly “Mainstream” journal’s  chief editor Sumit Chakravarty was the key-note speaker while senior counselor from Russian embassy Sergey Karmalito was the chief guest in the event .

Professor Arun Mohanty, presiding over the seminar, highlighted the importance of  Soviet contribution in the defeat of Nazi forces. Emphasizing the unprecedented sacrifice of Soviet Union that lost  27 million people in the war  he stressed  the significance of Stalingrad and Kursk battles that became the turning point in defeating Hitler troops in the second world war, known as Great Patriotic war in Russia.

Debunking the assertion by certain Indian circles that second world war was ‘not our war, the victory in that is not our victory‘, Professor Mohanty drew attention to Hitler’s plan Barbarossa that stipulated to invade India, which would have happened if fascist forces had not been defeated at Stalingrad. He talked about the misinterpretation of Molotov-Ribbentrop pact by certain Western circles  in order to accuse Moscow for ‘providing the trigger’ for the war while ignoring the implications of Munich pact that was signed a year before Soviet-Germany pact that was signed on 23rd August, 1939.

Analysing the reasons for the delay in opening the  second front by the West, Prof Mohanty warned against  the hobnobbing of western countries once again with the rising fascist forces in Ukraine. He drew attention to the dangerous implications  of  the recent attempt to re-write  the history of second world war .

Mainstream editor and eminent  journalist  Sumit Chakravarty, speaking  in the event, high lighted the heroism of Soviet people and huge  material and human losses  suffered by the Soviet Union during the second world war. He expressed serious concern about rise of neo-fascist forces in parts of the world including India and called for building common front in order to launch a struggle against this.

Bijay Padhiary, national secretary of  ISCUF (Indian Society for Cultural Relations with Foreign countries) in his speech recalled that Friends of Soviet Union, the predecessor to ISCUF, was organized in the wake of Hitler invasion of USSR and was patronized by Ravindranath Tagore  and Jawaharlal Nehru. This became a hugely popular movement across political parties in the country to express solidarity with the Soviet people waging a heroic battle against Fascist Germany.

Sergey Karmalito, Senior counselor from the Embassy of Russian Federation in India emphasized that every family in Russia was affected  by the  war and that the people keep the sacred memory of the war veterans intact. Highly appreciating India’s participation in the celebration of 70th anniversary  of victory over fascism, he hailed the presence of Indian delegation headed by President Pranab Mukherjee in Moscow celebration and marching of Indian contingent in red square.

Popular war-time Russian songs and documentary were presented in the event, and a special edition of the magazine “Business  Central Asia” dedicated  to the 70th anniversary of victory over fascism was distributed among the participants.