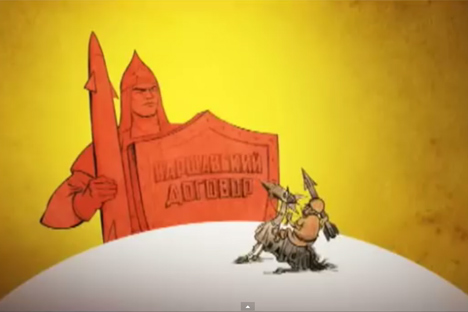 The all-Russia state television and radio broadcasting company VGTRK said the film, titled "Warsaw Treaty, the Declassified Pages" accumulates accounts by witnesses and participants in events dating back to 1968, without passing any judgments.

The all-Russia state television and radio broadcasting company VGTRK said the film, titled "Warsaw Treaty, the Declassified Pages" accumulates accounts by witnesses and participants in events dating back to 1968, without passing any judgments.

"The film conveys opinions by historians, witnesses and participants in those events. Nothing is said in the voice-over narration that this was right, or correct. It is just an accumulation of witnesses' stories," Pyotr Fyodorov, the head of the VGTRK's international relations directorate, told Interfax.

The film was made compliant with all canons of journalism and with the observance of all ethical norms, he said.

Unfortunately, Europeans are applying old Soviet-era yardsticks, "when each word spoken on television was taken for the word spoken by the Kremlin," he said.

"We are absolutely open to various opinions and judgments. The situation itself, in my view, is not so much a Russian problem, as a problem experienced by Europe, where a look back on the past is generalized and everything that does not fit into this formula is branded incorrect, or propaganda," he said.

In this particular case, journalists, not politicians should react to a piece of journalistic work, he remarked.

"I would advise European colleagues to move the focus from diplomats to professional journalists. One could start a discussion and exchange facts," Fyodorov said, adding that he sees no problem or tragedy in what happened.

The documentary "Warsaw Treaty, the Declassified Pages" was aired on May 23. On June 1 Slovak Foreign Ministry spokesman Peter Stano told the press in Bratislava that the film had raised many eyebrows in Slovakia.