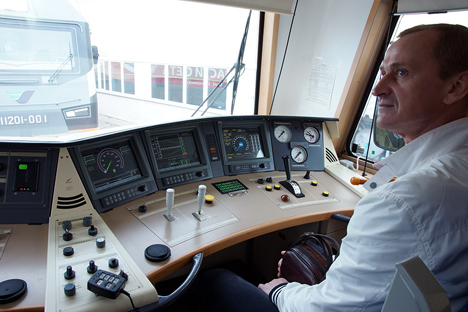 Russia and Austria will be linked by a broad-gauge rail line after a planned extension is laid to Vienna from a broad-gauge line connecting Slovakia to Ukraine.

The 450-kilometer line would run from Kosice, Slovakia, to Vienna and pass through Bratislava. Source: Olga Sokolova

Russia and Austria will be linked by a broad-gauge rail line after a planned extension is laid to Vienna from a broad-gauge line connecting Slovakia to Ukraine.

"A detailed feasibility study for the project […] is due to be ready by 2016," say papers for a meeting between the Russian and Slovak prime ministers, Dmitry Medvedev and Robert Fico.

The project, which emerged in 2007, would be put into practice by the national railroad companies of Russia, Slovakia, Austria and Ukraine and overseen by Breitspur, a company specially set up for the purpose, the papers say.

The 450-kilometer line would run from Kosice, Slovakia, to Vienna and pass through Bratislava. It would be an extension of the current broad-gauge line linking Uzhhorod in Ukraine to Haniska, a lage in Kosice region.

The Kosice-Vienna line project stems from a 2007 memorandum signed by Russian Railways (RZD) and the national railroad carriers of Slovakia, Austria and Ukraine. In 2008 the four companies signed a protocol on pre-construction research, in 2009 they signed a memorandum on setting up a joint venture to run the project and in 2010 they agreed an investment plan.

The future line would connect the rail network of Central Europe to Russia's Trans-Siberian Railway.

It would boost rail freight traffic between Europe and Asia and offer advantages to rail cargo transportation between the two continents in competing with sea and air carriage. Moreover, there will be no need to reload cargo at stations that are meeting points for 1,435-millimeter standard European-gauge tracks and the 1,520-millimeter-gauge track network covering the former Soviet republics.

The project has been valued at 6.3 billion euros.

Consultant Roland Berger said the new line would make it possible to reduce the time of cargo delivery from Asia to Western Europe to 15 from between 28 and 30 days (RZD\'s projection was 13 or 14 days) and bring down the cost of transportation along that route to $1,000 per container.

Traversing the Russian stretch of the route, from the country's eastern borders or ports to its western frontiers, is expected to take seven days.

Additionally, more spacious cars can be used on broad-gauge lines.

A study suggests that by 2050 it will be possible to transport between 16 million and 24 million tonnes of cargo along the extended rail line annually. According to estimates published earlier, annual freight volumes of transportation along the Kosice-Bratislava and Bratislava-Vienna sections are likely to reach 23.7 million tonnes and 18.5 million tonnes respectively.

Containerized freight and raw materials such as iron ore and metal would travel from Asia to Europe and containers would be carried in the opposite direction.