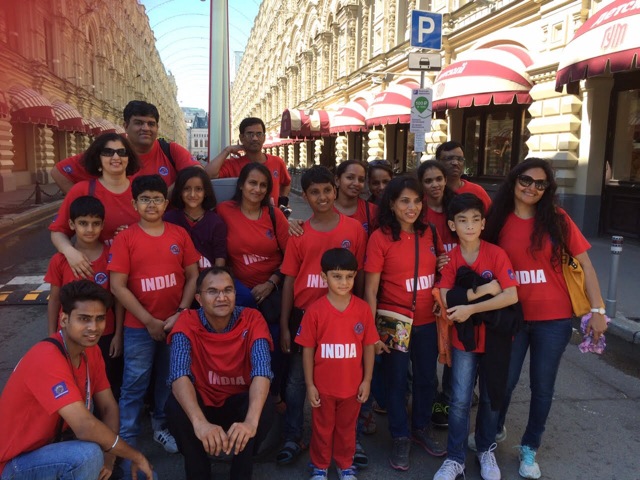 The members of Indian children team come from different parts of India. It is not only the Indian flag and “India” team uniform that unites them here. They all have survived cancer at some point of their short lives - the youngest team member is just seven. And they all have a great spirit for winning, too.

The children are patients of Tata Memorial Hospital  India's largest cancer hospital located in Mumbai. According to Dr Tushar Vora, pediatric medical oncologist at Tata Memorial who came along with the children, these games give young cancer survivors opportunity to show that they all are normal kids and can lead a normal life without limitations.

“These kids had different cancer, one of them has chronic myeloid leukemia, this is a disease which is going on but he is in complete remission now, another had kidney tumor and she is completely cured of it, another had rhabdomyosarcoma of the eye, and the list can go on,” - Dr Vora told RIR on the sidelines of the Games. “These are children are cured from cancer and we need to make sure that they live  a normal life as much as it is possible. They are as normal as any other kid. They can play any sport they want”, he added.

This year Indian team is sponsored by MedInd, a Mosow-based company organizing treatment for Russian patients in India. “In past two years we have organized treatment for more than 300 Russian children in India. More than half of them were cancer patients”, Anna Verbina, head of MedInd says.

The Winners Games are conducted in Moscow since 2010 and organized by “Podari Zhizn” (Grant a Life) Foundation co-founded by two Russian actresses Dina Korzun and Chulpan Khamatova.

“It is very important for these children to meet each other, to compete, to show they have no limitations”, - Chulpan Khamatova says. - “We had one girl last year who was in a wheel chair. She met another girl with same disease participating in sport competition without any wheelchair. The girl made a promise to return next year without a  wheelchair.  And you know she did, she is here today, on her feet”.

The 6th World Children Winners Games will continue for next three days. Later Indian team will be received by Ambassador P.S. Raghavan at the Indian Embassy in Moscow.