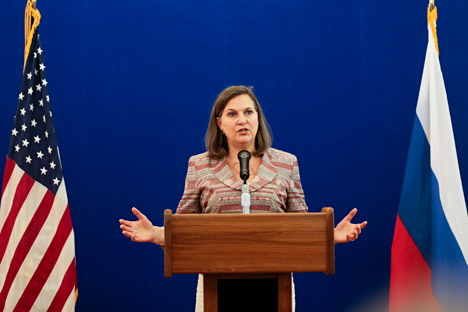 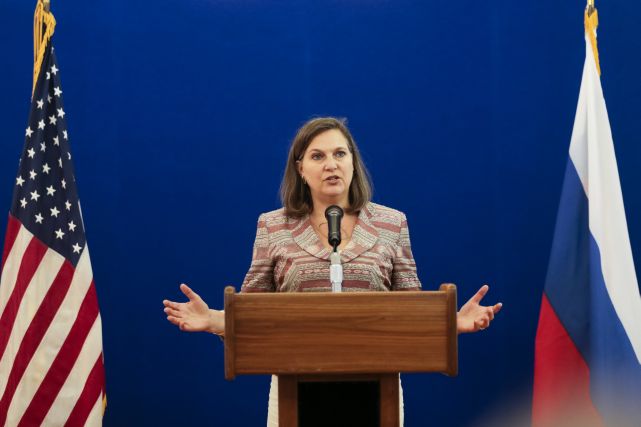 U.S. Assistant Secretary of State Victoria Nuland was in Moscow in May for talks on U.S.-Russia relations and Minsk accords. Source: AP

Anti-Russian sanctions will tighten if Moscow fails to honor the Minsk accords, U.S. Assistant Secretary of State for European and Eurasian Affairs Victoria Nuland has said. That will definitely happen, she said in an interview with Ekho Moskvy radio, answering a related question.

Nuland added that the sanctions would stay in place until the complete fulfillment of the Minsk agreements, including restoration of Ukrainian sovereignty over all borders and withdrawal of Russian armaments and troops from the Ukrainian territory.

The sanctions will be lifted, with the exception of Crimea, after the Minsk accords are fully implemented, Nuland emphasized.

The assistant secretary added that the pressure would grow in the case the 'separatists' backed by Russia continued to seize lands and overstep the limit drawn by the Minsk agreements. This is not a choice of America; this is a position of the United States and the European Union and a response of the international community to Russia's violation of baseline provisions of international law, she underlined.

Moscow has repeatedly said on various levels, including the supreme one, that there are no Russian troops deployed in Ukraine and arms are not delivered there either.

Washington is unable to give a precise answer whether a meeting between Russian President Vladimir Putin and his U.S. counterpart Barack Obama is possible in the foreseeable future.

Assistant Secretary of State for European and Eurasian Affairs Victoria Nuland said in an interview with Ekho Moskvy radio they had made no plans but would wait and see which way the wind is blowing. She was asked whether the Russian and U.S. leaders might meet on the sidelines of the upcoming UN General Assembly session in September or somewhere else.

Read more: Obama’s legacy and Russia: What the future holds for Moscow and the U.S.