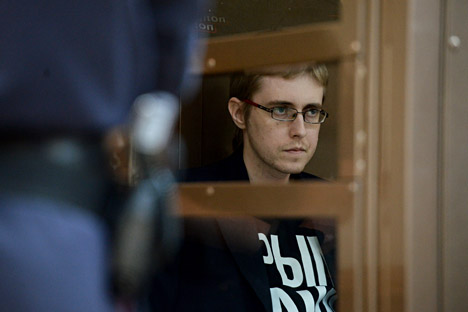 The Moscow City Court has given a lifetime sentence to the leader of the Combat Organization of Russian Nationalists (BORN), Ilya Goryachev. He was found guilty of organizing the five murders he had been charged with.

Ilya Goryachev, the leader of the ultranationalist group BORN (militant organization of Russian nationalists), listens in court as his conviction and sentence are announced. Souce: Iliya Pitalev / RIA Novosti

The Moscow City Court has given a lifetime sentence to the leader of the Combat Organization of Russian Nationalists (BORN), Ilya Goryachev. He was found guilty of organizing the five murders he had been charged with.

An Interfax correspondent said the sentence was pronounced by Judge Pavel Melekhin.

The jurors said Goryachev was guilty on all counts. In the opinion of the panel, the defendant did not deserve lenience.

Public prosecutors demanded a lifetime sentence for Goryachev in the argument on the legal implications of the verdict.

The sentence said Goryachev must pay 5 million rubles in compensation for moral damages suffered by the mother of killed anti-fascist Ilya Japaridze. The judge thereby upheld the civil lawsuit of the plaintiff.

The defense team believes that the court could have acquitted their client despite the guilty verdict of the jury.

The lawyers also think that Goryachev cannot be sentenced to life in prison under the extradition law.

"Goryachev was extradited from Serbia which punishes a similar offense with 40 years in prison tops," lawyer Nikolai Polozov said.

The jury trial of Goryachev began on June 2. Goryachev pleaded not guilty.

"The conviction is legal and fair. This conviction has become possible thanks to the well-coordinated work of the Prosecutor's Office and the Investigative Committee, which arranged Goryachev's extradition from Serbia," State Prosecutor Maria Semenenko told reporters after the verdict was pronounced.

Russia has fulfilled all the conditions envisaged by the international convention on extradition, she said.

"One of the guarantees was that Goryachev would not be given the death penalty," the prosecutor said.

Goryachev was charged with creating an extremist community and participation in attacks, killings based on motives of ideological and ethnic feuds involving banditry and the illegal storage of weapons.

According to investigators, Goryachev and Nikita Tikhonov, who had radical nationalist views, created an extremist community and the military group BORN in Moscow in mid 2008. The prosecutors believe its purpose was to kill citizens based on motives of ideological and ethnic hatred and feud, and to attempt killings of law enforcement officials in revenge for their lawful activities.

According to investigators, several killings, including the killing of Ilya Japaridze, leader of the movement Antifa, a citizen of Tajikistan, a member of the group Black Hawks, and lawyer Stanislav Markelov were committed under Goryachev's leadership.

Goryachev went into hiding and was put on the international most wanted list. He was eventually detained in Serbia and extradited to Russia in 2013 at the request of the Prosecutor General's Office.

On March 31, 2015, the jury of the Moscow Region Council found other members of the extremist community guilty of affiliation to the BORN gang and perpetration of nine murders motivated by ideological reasons and ethnic hatred. The court gave them long sentences, including life in prison.