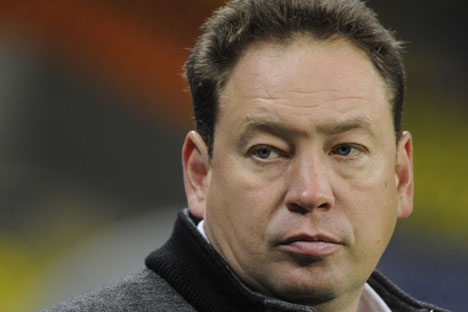 "Given the complicated situation currently facing the national team, FC CSKA agreed to meet the Russian Football Union's administration half-way and allowed Leonid Viktorovich to combine the posts at the club and the national team prior to the completion of the UEFA Euro 2016 qualifiers," FC CSKA said.

"FC CSKA wishes our coach every success both with the club and the national team," it said.

The Russian Football Club, for its part, noted that this appointment had been supported by Russia's Sports Ministry.

"The decision was supported by the Sports Ministry of the Russian Federation. We are grateful to the administration of the Football Club CSKA, which did not stay indifferent to the interests of the national team," the Russian Football Union said in a press release.

Slutsky was first trained to play football in Volgograd and then played for local clubs. He had to end his playing career early after sustaining a serious household injury. Slutsky received his first coaching experience when working with Volgograd's FC Olimpia in 2001. Afterwards, he trained FC Uralan (Elista), FC Moskva and FC Krylia Sovetov.

In 2009, Slutsky took over as the head coach of FC CSKA and, under Slutsky, FC CSKA twice won Russia's championship and the Russian Cup.

Under Capello, the Russian national football team qualified for the 2014 FIFA World Cup finals, but failed to reach even the play-off stage.

Russia is currently in third place in the UEFA Euro 2016 qualifiers.