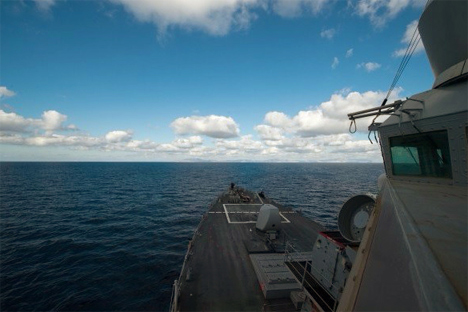 #SeaBreeze15 Naval forces are stronger when we operate together with our #Partners-VADM Foggo http://t.co/VClUl2nLxdpic.twitter.com/TaudkFek4f

"Since the annexation of Crimea, the Black Sea region has no longer been stable or secure," the prime minister said at the military exercise's opening ceremony held in Odessa on Sept.1.

In the exercise, the Ukrainian troops are tasked not only with finding common ground with their partners from other countries but they also have to start switching over to NATO standards, he said.

Yatsenyuk recalled that with the help of trust funds formed by the alliance the Ukrainian Armed Forces are creating new logistics, intelligence and training systems. All that, in the premier's opinion, will enable Ukraine to get Crimea back - sooner or later.

"The Ukrainian Navy will return to Crimea," Yatsenyuk said.

The Ukrainian prime minister's view over the drills prospects has gained the support of U.S. Ambassador to Ukraine Geoffry Pyatt who acknowledged the strategic importance of the Sea Breeze for the Black Sea region.

He also reiterated the United States advocating the principles of protecting the independence and sovereignty of Ukraine. In return, Yatsenyuk thanked the U.S. people for backing the people of Ukraine in their fight for independence.

The Sea Breeze multinational naval drill will take place in the Odessa and Nikolaev regions and also in the northwestern part of the Black Sea. The exercise is due to be completed on Sept. 12.