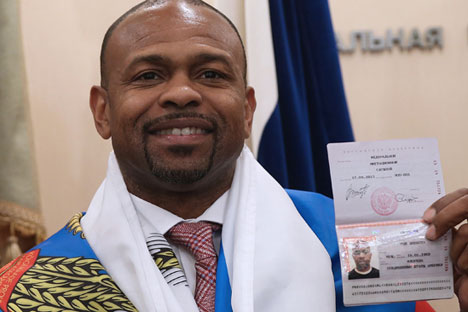 Professional Boxer Roy Jones Jr. holds his Russian passport as he poses for a photograph at an office of the Federal Migration Service.

Artem Korotaev / TASS
'I am Russian,' Jones said during a ceremony in Moscow.

U.S. professional boxer Roy Jones Jr. has received his Russian passport during a ceremony at the Federal Migration Service in Moscow, according to the official web site.

The athlete said it was a great event for him, happy to think he would be coming to Russia as its citizen. "I am Russian," Jones said in Russian.

Russian President Vladimir Putin signed a decree to grant citizenship to Jones, 46, on September 12. Jones announced his intention to seek Russian citizenship at a meeting with Putin in Crimea on Aug. 19.

According to the 46-year-old boxer, who at various times has held the title of both IBF and WBA world champion in different weight divisions, from middleweight to heavyweight, he needs a Russian passport for business purposes. For his part, Putin expressed the hope that the move would improve relations between Russia and the United States.