Russia has not received NATO's proposals to cooperate in fighting terrorism

Interfax
Russia's Permanent Representative to NATO, Alexander Grushko, said in an interview with Interfax in Brussels

Most European countries that face terrorist threats have realized the need to broadly unite efforts in order to combat international terrorism, Russia's Permanent Representative to NATO, Alexander Grushko, said in an interview with Interfax in Brussels.

"This is the objective of Russian President Vladimir Vladimirovich Putin's initiative to establish a broad anti-terrorist front. [It is also the goal of] appropriate Russian steps, including those being taken on the UN 'platform'. We have not received any proposals from NATO to restore interaction as part of the fight against terrorism," the high-ranking Russian diplomat said. 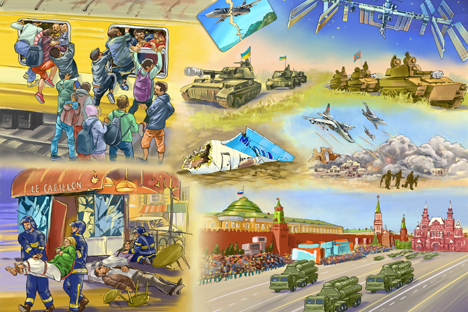 "We have only been asked to play a 'constructive role in Syria and in the fight against ISIS [Islamic State, outlawed in Russia]. This idea is strange, if not to say inappropriate because the operation of Russia's Aerospace Forces in Syria, which is being conducted at the invitation of the Syrian government and in full compliance with international law, is aimed at tackling exactly these tasks. And they are being tackled successfully," Grushko said.

Furthermore, "it is necessary to remember that NATO itself is not playing any individual role in the region of the Middle East and North Africa," he said.

"NATO, as an organization, and its individual members bear direct responsibility for these gigantic territories having turned into a stronghold for all sorts of terrorists and extremists as a result of the operations conducted in Iraq and Libya bypassing international law. The alliance's activity is now restricted to helping bolster the defense potential of the region's states, among them Jordan and Iraq," the Russian diplomat added.

"Coordination of measures as part of the counter-terrorist fight - an imperative task if we really want to neutralize the threat being posed by ISIS and other extremist groups - will take place on a bilateral basis with individual members of the anti-ISIS coalition relying on the relevant resolutions of the UN Security Council," Grushko said.

"However, I am not going to assess the extent of NATO's readiness to restore counter-terrorism cooperation with us as part of the Russia-NATO Council. By breaking off the dialogue and suspending the implementation of specific projects, NATO countries caused damage to themselves and the security of their own citizens in the first place, while the niche that belonged to the Russia-NATO Council in the fight against terrorism is being filled up with other formats of cooperation," Grushko said.

Read more: What can we expect from Russian foreign policy in 2016?