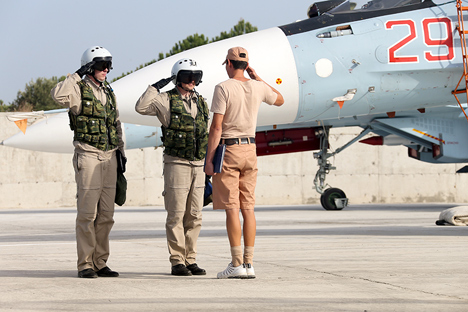 Mil.ru
Russian Defense Ministry has refuted the reports by some Western media

Russian Defense Ministry has refuted the reports by some Western media that Russia allegedly intends to create a new airbase near the populated area of Al Qamishli in Syria.

"There are no 'new' airbases or additional pre-strike staging ports for Russian warplanes in the territory of Syrian Arab Republic and there are no plans to create them," Russian Defense Ministry spokesman Igor Konashenkov told Interfax.

"The insinuations in this regard published by the British newspaper The Times is an amateurish farce or a clumsy move for a media disguise of Turkey's pulling a large force grouping towards the Syrian border near Al Qamishli," he said.

"We have repeatedly said that the time of flight to any kind of target in the most remote point of this country for warplanes of the Russian aviation group in the Syrian Arab Republic roughly amounts to half-hour. Therefore, only absolute outsiders can seriously talk of any deployment of the Russian aviation in the populated area of Al Qamishli located at the Syrian-Turkish border," he added.