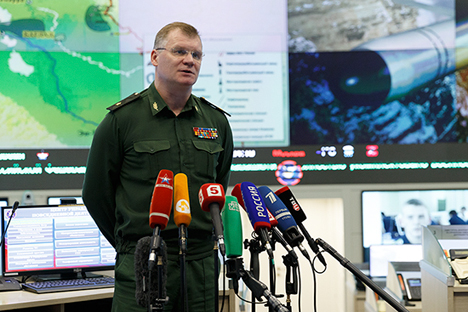 "Prime Minister Ahmed Davutoglu who was visiting Ukraine yesterday went as far as to even say that Russia launched from the Caspian Sea waters what is allegedly - I stress - a ballistic missile against a hospital in the province of Idlib. I will say straight away that the Caspian Flotilla has not one ship that is capable of carrying out such a ballistic missile launch," Konashenkov said.

"Both reports about hospitals and schools allegedly destroyed in Azaz, of February 10, and in Idlib, of February 15, contain the same input data: Gaziantep, Turkey. The information as to where these fakes were written apparently got published owing to the oversight of the authors or website editors," he said.