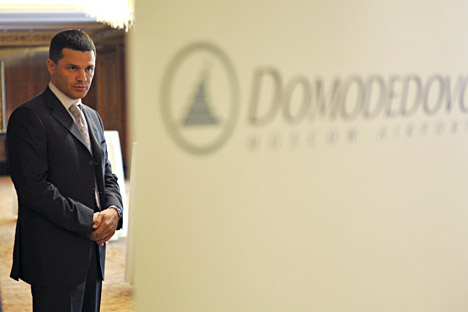 Dmitry Kamenschik, the owner of Domodedovo.

Actual owner of the Domodedovo airport Dmitry Kamenshchik is detained and indicted in the criminal case over the terrorist attack in 2011, Russian Investigative Committee's spokesman Vladimir Markin said.

"The first investigative directorate of the Main Investigative Directorate of the Russian Investigative Committee based in Moscow within the criminal case against former head of the Russian representative office of Airport Management Company Ltd., Svetlana Trishina, former managing director of CJSC Domodedovo Airport Aviation Security Andrei Danilov, former director of the airport complex Vyacheslav Nekrasov as well as other unidentified people actual owner of the Domodedovo airport Dmitry Kamenshchik was detained," Markin said.

"He [Dmitry Kamenshchik] was charged with perpetrating a crime under Article 238 Part 3 of the Russian Penal Code (the fulfillment of works or the provision of services, which do not meet security requirements that entailed the death of two and more people through negligence)," Markin also said.

Presently, a measure of restraint in the form of putting into custody is about to be handed down on Kamenshchik. The investigation into the criminal case continues.