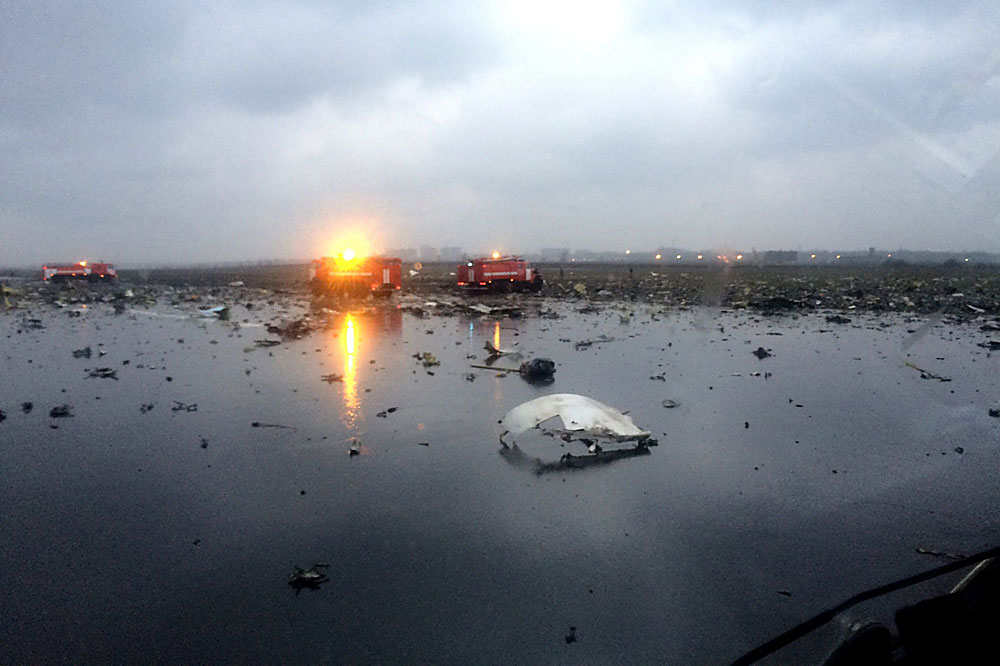 In this photo provided by vk.com/rostovnadonu, Russian emergency fire trucks are seen among the wreckage of a crashed plane at the Rostov-on-Don airport, about 950 kilometers (600 miles) south of Moscow, Russia Saturday, March 19, 2016.

AP
A total of 61 people, including the crew, who were on board a Boeing 737-800 passenger jet bound from Dubai, were killed in a crash in southern Russia’s Rostov-on-Don airport, emergencies services told TASS.

A total of 61 people, including the crew, who were on board a Boeing 737-800 passenger jet bound from Dubai, were killed in a crash in southern Russia’s Rostov-on-Don airport, emergencies services told TASS.

"According to specified information, there were 55 passengers and seven crew members on board," a source said.

"According to preliminary data, the jet bound from Dubai crashed during runway approach," he said.

The Russian Emergencies Ministry’s Southern Regional Center confirmed information on the crash. The Rostov-on-Don airport is currently closed.
Emergencies services told TASS that "during runway approach the plane fell apart and caught fire." "The fire has been put out by now," a source said.

Operative groups of rescuers and other emergencies services are working on the site.

Putin orders to make everything necessary for families of victims in Boeing crash
The Boeing 737-800 fell to pieces during the second attempt to land, the Russian Emergencies Ministry’s Southern Regional Center’s chief Igor Oder said.

"The aircraft completely fell apart at the start of the runway," Oder said during a video conference held by the Russian emergencies minister.

He said most people on board the crashed passenger jet Boeing-737-800 were residents of Rostov-on-Don, adding that there also were foreigners among them.
A storm warning had been declared in Rostov-on-Don the day before.

A day of mourning will be declared in the Rostov Region due to the crash of the Boeing 737-800 jet, regional governor Vasily Golubev told journalists.

"Tomorrow will be declared a day of mourning. The government will render assistance to relatives of those killed," Golubev said.

"An operative and investigative group of the Southern Transport Investigative Department of the Investigative Committee of the Russian Federation has departed for the site of the accident," the department said.