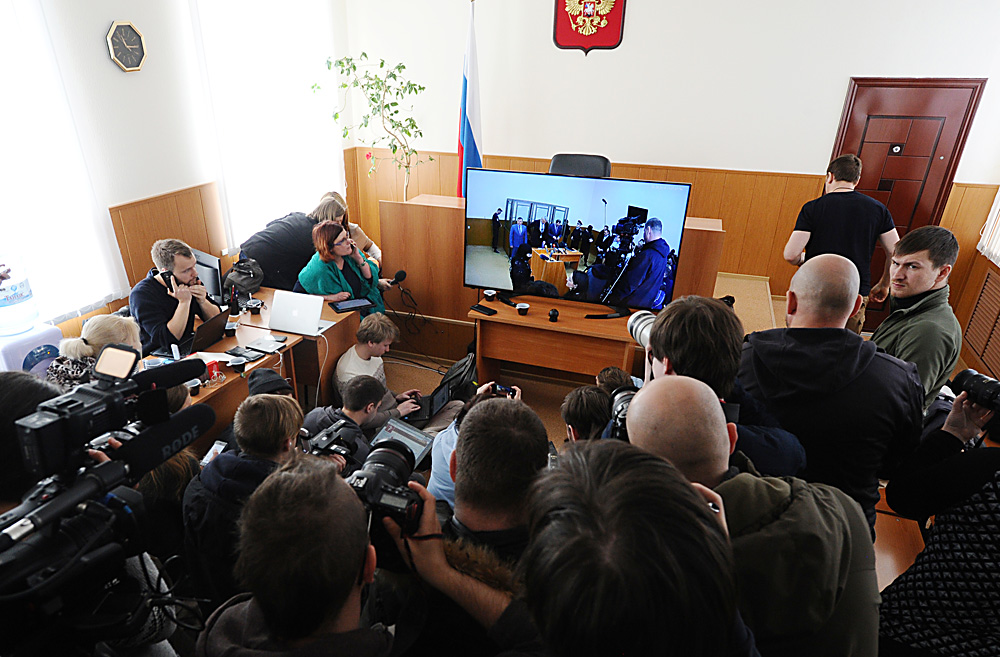 Journalists watch closed-circuit television transmitting the image from a courtroom at the Donetsk City Court. The court is to begin the announcement of the verdict in the case of Ukrainian citizen Nadezhda Savchenko on March 21.

The Donetsk City Court of Russia's Rostov Region has convicted Ukrainian pilot Nadiya Savchenko, who is charged with being responsible for the deaths of Russian journalists in the self-proclaimed Lugansk People's Republic in eastern Ukraine, an Interfax correspondent reported on March 21.

"Nadiya Viktorovna Savchenko committed the killing of Kornelyuk and Voloshin by a group of persons by previous concert for hatred and enmity motives," Leonid Stepanenko, chairman of the collegium of judges, said.

According to Russian investigators, Ukrainian Armed Forces officer Nadiya Savchenko was at a base of the Aidar battalion near the town of Metalist, Slovianoserbsk district, Lugansk region on June 17, 2014. She was conducting secret observation and adjustment of artillery fire on a Lugansk militia roadblock where civilians, including three journalists from Russia's VGTRK broadcaster, were present. The shelling killed two Russian journalists, Igor Kornelyuk and Anton Voloshin.

The Ukrainian citizen is also charged with the illegal crossing the Russian border from the territory of the Lugansk region, which she committed no later than June 23, 2014 in the area of the local checkpoint Donetsk-Severny.

Savchenko and her defense lawyers deny involvement in the said crimes. They said Savchenko had already been captured and was in central Lugansk when the journalists died, which is confirmed by her phone bills and the testimony of an expert, which said that the video of the Ukrainian citizen's detention indicates that it occurred one hour prior to the journalists' death. Savchenko said she was taken to Russia after being held in Lugansk for almost a week and was taken to the building of the regional department of the Investigative Committee for the Voronezh region.

Her lawyer Mark Feygin said Savchenko wants to go on dry hunger strike in ten days, when the sentence takes legal effect. "She believes she should be sent home immediately after this date", he told Interfax.

Feygin said Savchenko has no intention of filing an appeal. "It's her decision, she believes not filing an appeal will speed up the negotiation process and her handover to Ukraine," the lawyer said. This decision will make it impossible to have the sentence reversed in the European Court of Human Rights, he said.

Savchenko has been in custody in Russia since July 2014. She is now in a detention facility in Novocherkassk, which is located some 100km from Donetsk, Rostov region, where the trial has been held.

Kiev and the global community have more than once called the "Savchenko case" politically motivated and demanded her release.

During a hearing in the Donetsk City Court on Dec. 17, 2015, Savchenko went on hunger strike until the end of the trial.

On March 4, she declared a dry hunger strike, refusing to drink water, but ended it on March 10 before the sentencing, which is scheduled for March 21-22.