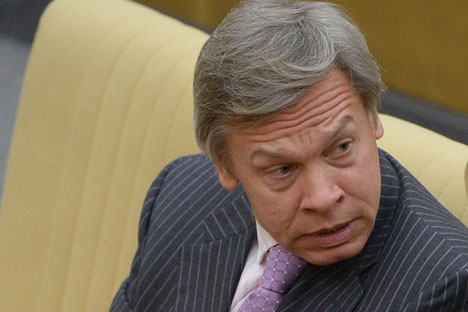 "Hroysman is considered to be a technocrat. It seems to me that he should learn certain lessons from Yatsenyuk's work. Practical, reasonable and healthy economic policies are now more important to Ukraine than ideology. If he takes this path, I think he may be more successful as premier," Pushkov told a press conference in Moscow on April 13.

"I have no special illusions about Hroysman's political orientation," he said.

Pushkov said Hroysman is known from the issue of the creation of an interparliamentary contact group in the OSCE Parliamentary Assembly, which has been discussed for a long time. A decision on that was made with Ukraine's consent in Baku in July 2014.

"The Ukrainian side has blocked the work for two years, although consent was given and it participated in the first founding meeting of the group [...] We have always received negative responses from Hroysman, he disrupted all events that could have led to the creation of an interparliamentary contact group in the OSCE Parliamentary Assembly," Pushkov said.

"I can conclude from that that no independent position, independent role in politics can be expected from Hroysman. I think he will be to a considerable degree a technical and pragmatic prime minister, who will try to find his own logic, not to act in Yatsenyuk's logic," Pushkov said.

He believes that "it is premature to expect this replacement to change Ukraine's approach to the Minsk agreements."

At the same time, Pushkov believes that "the replacement [of Yatsenyuk with Hroysman] is generally not negative in any case in terms of Russian-Ukrainian relations because it would be difficult to find a more anti-Russia person that Yatsenyuk."

"For this reason, it seems to me that this replacement will be neutral in terms of the relations between Kyiv and Moscow or will eliminate some irritating issues and the targeted policies to break all relations, which were pursued by Prime Minister Yatsenyuk," Pushkov said.