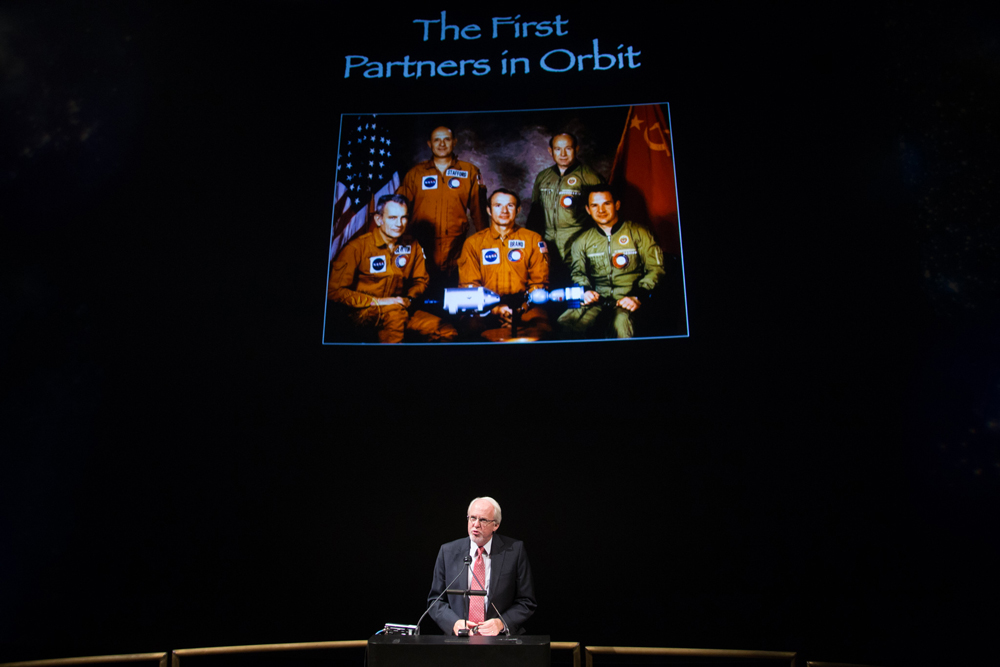 The Carmel Institute of Russian Culture and History hosted its 5th Symposium on April 19, 2016 entitled “Partners in Orbit,” highlighting the partnership between the United States, Russia and the International Space Station.

Over six hundred students and scholars, representing thirty-two universities from nine states and over a dozen countries attended this memorable symposium celebrating cooperation between the two nations.

Russian Ambassador to the United States Sergey Kislak reminded the audience of the lessons learned from this partnership in space when he said “The kind of cooperation that we have on the International Space Station is exactly the model we need to strive for in building serious and long-term positive relations between our two countries. One of the interesting features of the ISS project is that both Russia and the United States have been able to isolate it from the crises and disagreements that we had on a number of issues that do exist between our two countries. Instead, we chose our ability to be wise and look into the future. For me, the lessons from the cooperation in the Space Station were just about that - our mutual ability to finally be wise."

Washingtonu2019s National Air and Space Museum gets a Gagarin bust

Deputy Director, General Roscosmos, Sergei V. Saveliev remarked, “If we look into the past of humankind, we will see that there have been several universal themes going throughout human history.  One of them is this constant desire to go to the frontier of the known world, to study it, and then to go forward to the unknown.  Of course, human space flights have seen some breakthroughs and setbacks, some rivalry and some friendship, but what was universal is the idea of cooperation, which was the driving factor of many endeavors.”

Sergey Krikalev, Deputy Director of the Central Engineering Research Institute, also lauded the U.S-Russian partnership when he said, “It is just amazing that the race to space, which was done in the midst of the darkest years of the Cold War, had not escalated into ultimate, devastating conflict. Maybe it is the nature of space, as the first human in space, soviet cosmonaut Yuriy Gagarin, has noted, that “there’s no boundary visible from here”.

Said the evening’s moderator and panelist Dr. Anton Fedyashin, "In celebrating US-Russian cooperation in space, we hope that hearing from our accomplished speakers will not only inspire students from across the world to excel in their studies, but also foster international cooperation that benefits mankind as a whole."

Susan E. Carmel closed the evening with a specific focus on the students and scholars in the audience when she said, “Speaking to the students, Susan Carmel said" I hope that you will recall this evening with a feeling of unlimited potential for the future, as it relates to space as well as to future cooperation between nations. Nations are made up of land, industry, and many things but most importantly, nations are people, and it is mutual respect, understanding and cooperation between people that makes this world a better and more peaceful place."