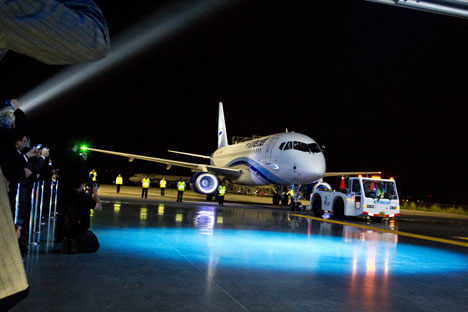 Interjet was the first foreign operator of SSJ-100 airliners.

Sukhoi Civil Aircraft Company (SCAC) and Mexico's Interjet are to establish a joint venture to promote Sukhoi Superjet 100 (SSJ-100) airliners across North, Central, and South Americas, the Russian Ministry of Industry and Trade said on April 22.

The parties have signed an agreement that stipulates, apart from everything else, for the opening of a maintenance center to service the Russian airliners in these regions of the world.

It was reported earlier, that Interjet was the first foreign operator of SSJ-100 airliners. Currently, 21 jets of this type are in the company's fleet already. As per the contract signed recently by Interjet, the airline orders the total of 30 airliners to be supplied in 2016.

"For the purposes of SSJ-100 shipments, Interjet has developed and successfully introduced, the trilateral international export support and guarantee scheme with participation of Russia's EXIAR, France's COFAS, and Italy's SACE, as export agencies," the ministry said.

SCAC was incorporated in 2000, to implement civil aircraft projects, including the designing and manufacturing of Sukhoi SuperJet 100 airliners.