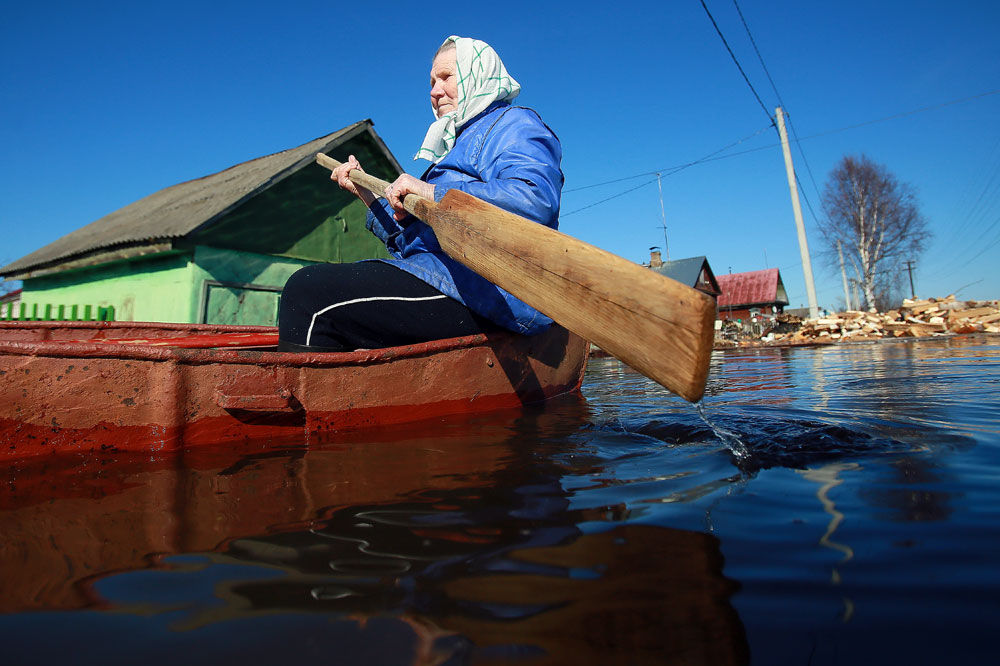 A resident of the village of Kholui paddling to reach her house. Due to the rising waters of the Teza River, several houses in the village were flooded, April 2016.

Floods have affected over 3,000 homes in various regions of Russia, the Emergency Situations Ministry press service told reporters on May 4.

"A total of 3,012 private homes with 3,153 tenants remain flooded in 126 populated localities," the press service said.

"The flood waters have retreated from two populated localities over the past day, and the number of inundated houses has been reduced by 100," it said.

The flood has affected 32 low-lying bridges, and six sections of motorways.

"The flood conditions are being monitored in the Kirov region, the Perm territory, the Republic of Bashkortostan, the Nizhny Novgorod region, the Omsk, Tyumen and Sverdlovsk regions," the press service said.

The number of inundated houses has been reduced in practically all of those regions over the past 24 hours. Yet, the flood zone has expanded in the Sverdlovsk region, the press service continued.

"The flood aftermath is being cleaned up in every populated locality. Reconstructions will begin as soon as the flood waters retreat," the ministry said.

Rescuers are giving targeted assistance to the population; they are delivering food, drinking water and essential goods, and are transporting local residents by boat wherever necessary.

"Commissions are at work to assess the damage, and mobile teams are cleaning up territories, removing litter, pumping out water and restoring infrastructures," the ministry said.