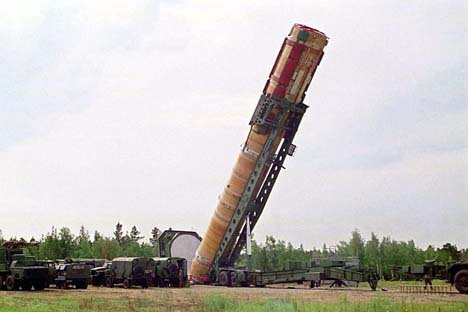 The Sarmat ICMB is due to replace RS-20V "Voyevoda" (NATO code name SS-18 "Satan") at some point.

Mil.ru
The Sarmat ICMB is due to replace RS-20V "Voyevoda" at some point

Tests of Russia's newest intercontinental ballistic missile RS-28 'Sarmat" are due to begin this year, General Director and General Designer of the Makeyev State Rocket Center Vladimir Degtyar has said.

"We have a rather busy schedule for 2016: we are entering the stage of 'drop' tests in the Sarmat project. The large-scale important work continues," Degtyar said at an annual trade union conference of the enterprise.

Sources from the rocket and space industry told Interfax-AVN earlier that the first test-launch of a Sarmat missile was planned for the second half of 2016. Drop tests were scheduled to take place before that. The source explained that during the drop tests the missile would be fired from a silo, by use of a cartridge pressure accumulator, to an altitude of 30-40 meters; as a rule, the missile's cruise engine is started after that.

The Sarmat ICMB designed by the Makeyev State Rocket Center in Miass, Chelyabinsk region, and built by the Krasnoyarsk Machine-Building Plant, is due to replace RS-20V "Voyevoda" (NATO code name SS-18 "Satan") at some point.

According to a source from the rocket and space industry, the new missile will be able to deliver a multiple warhead of up to ten tonnes "to any place on Earth via the North Pole or the South Pole."

Russian Deputy Defense Minister Yury Borisov told Interfax-AVN earlier that mass production of Sarmat was due to begin before 2020 and deliveries might start in 2018-2019.