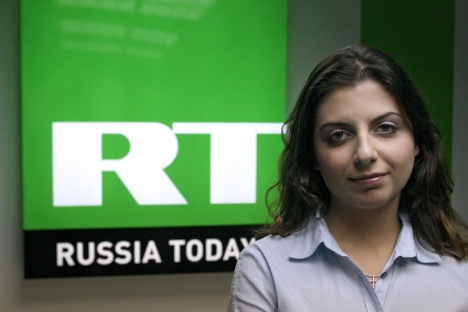 Margarita Simonyan, the editor-in-chief of the RT television channel

Ukrainian President Petro Poroshenko has signed a decree enacting the National Security and Defense Council resolution (of May 20) imposing sanctions against 17 representatives of Russian media outlets.

Putin calls 'media attacks' a reaction to the consolidation of Russia

The Cabinet and the Ukrainian Security Service have been instructed to ensure efficient implementation of the individual special economic and other restrictive measures.

The Ukrainian Foreign Ministry is to inform the competent authorities in the European Union, the United States and other countries of having introduced the sanctions and suggest that they apply the same restrictive measures against these individuals.

Control over implementation of this resolution has been entrusted to National Security and Defense Council Secretary Oleksandr Turchynov.

The decree shall be effective from its publication date.