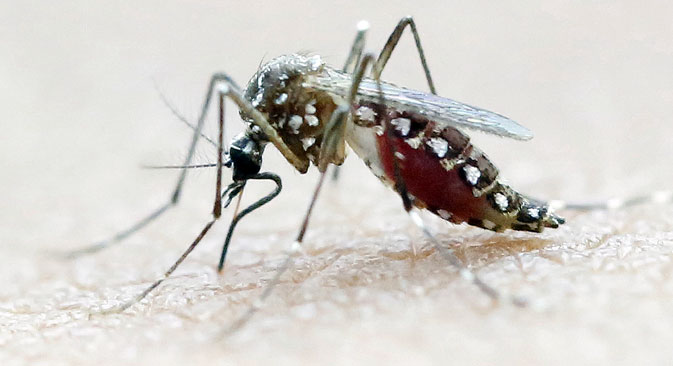 An Aedes Aegypti mosquito seen on a human hand in a lab of the International Training and Medical Research Training Center (CIDEIM) in Cali, Colombia

Reuters
Russia's chief epidemiologist says there are no high risks for the guests of the Olympics.

No major risks of being infected with the Zika fever for the participants in the Olympics in Brazil exist now, the head of the Russian consumer rights watchdog (Rospotrebnadzor) and Russia's chief epidemiologist, Anna Popova, told Interfax.

"The epidemiological situation in Brazil is within the scope of our close attention today. According to official information, which is available to Rospotrebnadzor, there are no high risks for the guests of the Olympics," Popova told Interfax on Saturday.

How to avoid the Zika virus during the 2016 Rio Olympics
As was reported previously, over a hundred of doctors from around the world have signed an open letter to World Health Organization Director General Margaret Chan, asking to delay or move to another timeline the 2016 Summer Olympics in Brazil due to the danger of spreading the Zika virus.

Doctors, whose majority represent the United States, said that it had been unethical to put the Olympics participants in Brazil at risk.

"We are aware of this information. We are closely cooperating in holding the Olympics and the participation in it safely with the Sports Ministry and other federal bodies of the executive branch of power. The situation remains under control," Popova said, commenting on the media reports.

The International Olympic Committee is due to decide on holding or moving the Olympics to another timeline, she said.