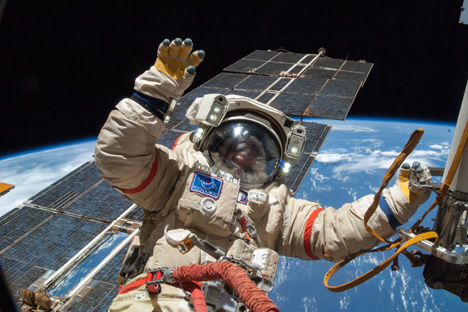 A Russian cosmonaut floats free from politics outside the International Space Station.

NASA
At the end of the tests, the Progress MS will be reattached to the ISS

The modernized manual remote control system will be tested on the Progress MS cargo spaceship on July 1, Roscosmos said.

"In the course of testing, the cargo spaceship will be unfastened from the Pirs (SO-1) docking unit of the International Space Station (ISS) at 8:35 a.m. Moscow time and moved to a distance of approximately 200 meters for an all-inclusive check of the manual remote control system. The cargo spaceship will be controlled by Roscosmos cosmonauts Alexei Ovchinin and Oleg Skripochka from the ISS," the report said.

The tests will finalize the test flight program for the Progress MS, it said.

The manual remote control system is operated from the ISS by use of two joysticks and a console. One of the joysticks controls the ship's movement and the other guides its orientation. The system includes a video camera installed on the docking ship.