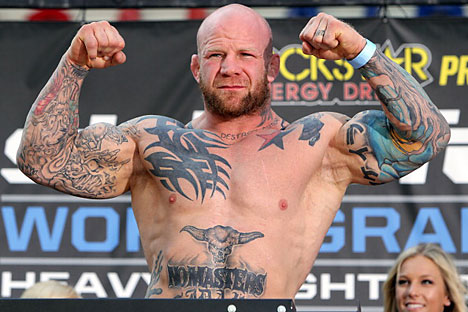 Titled U.S.-born MMA (Mixed Martial Arts) fighter Jeff Monson, who was granted the Russian citizenship last year, has arrived in Lugansk to start his visit to the self-proclaimed Donbass republics with a sports program, the LuganskInformCenter news agency reported on June 27.

Monson is expected to hold master classes for young athletes of the Lugansk People’s Republic (LNR) as well as competitions between law enforcers.

From Lugansk, Monson will head to Donetsk.

The 45-year-old fighter is the two-time winner of the ADCC Submission Wrestling World Championship, and a No Gi Brazilian jiu-jitsu World Champion.

Among numerous tattoos on his body, Monson sports two tattoos in Russian saying ‘svoboda’ (freedom) and ‘solidarnost’ (solidarity). Tattoos of Hammer and Sickle (a symbol of former Soviet Union) a red and black star are also inked on Monson’s body.

In one of Moscow tattoo salons last year, Monson made a tattoo running up the whole length of his left thigh with the image of Russia’s world-famous monument, The Motherland Calls. The monument, located on the Mamayev Kurgan in the Russian city of Volgograd, was erected to commemorate the heroic feat of the Soviet soldiers in one of the bloodiest WWII battles known as the Battle of Stalingrad.

MMA fighter Jeff Monson: I feel deep down that Russia is my home>>>