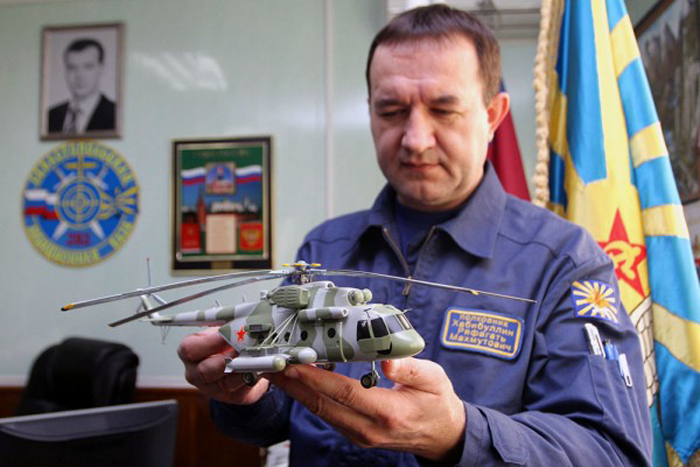 The memorial services for Russia’s helicopter pilots Ryafagat Khabibullin and Yevgeny Dolgin who were killed in action in Syria on July 8 have been held in Russia on July 12.

Several hundred military of the Korenovsk garrison (the 55th army aviation regiment base) in the Krasnodar Territory, Southern Russia, and local residents gathered to pay last respects to the crew commander Khabibullin.

They laid flowers and wreaths at the coffin with the pilot at the beginning of the memorial service to the sound of a military orchestra. The ceremony ended with a gun salute. The Mil Mi-35 combat helicopters and Sukhoi Su-27 fighters flew over the square in the end.

Governor of the Krasnodar Territory Veniamin Kondratyev, who participated in the mourning event, said that Khabibullin has trained more than a dozen pilots and has always remained at the forefront.

After the farewell ceremony in Korenovsk, the pilot’s body will be transported to Syzran (Samara region) where cadets of the local military aviation school will pay last respects to him. After that, his body will be airlifted by helicopter to the Vyazovy Gai settlement in the Ulyanovsk region, where the pilot was born. The funeral ceremony will begin at his home at around 17:00, and then an open air memorial service will be held between the local mosque and culture center. Khabibullin will be buried at the local cemetery.

It is planned to name after him the Komsomolskaya Street, where the hero lived. The issue of setting up a monument to the pilot is also being discussed.

Meanwhile, the memorial service for Yevgeny Dolgin was held in the Ostrov settlement of the Pskov region, Northwest Russia. His fellow servicemen form the army aviation brigade stationed in the Pskov region paid last respects to the instructor pilot.

"In the aviation formation of the Western Military District, stationed in the Ostrov settlement of the Pskov region, the comrade-in-arms paid last respects to Yevgeny Dolgin with the guard of honor and military salute. The Kamov ka-52 and Mi-8 helicopters flew over the funeral ceremony," the press service of the military district said.

The ceremony was attended by Deputy Commander of the Western Military District troops Lieutenant General Sergey Kuralenko, as well as governor of the Pskov region Andrei Turchak. After the memorial service, the pilot’s body was sent to his home in the Saratov region. According to previous TASS reports, the funeral of the 24-year-old pilot will take place in the Sokolovo settlement on July 13.

After graduation from the Syzran Higher Military Aviation School, Dolgin was sent to serve in the Pskov region, to the 15th brigade of army aviation where he piloted helicopters.

According to the Russian Defense Ministry, pilot-instructor Yevgeny Dolgin and commander of the 55th separate army aviation regiment Colonel Ryafagat Habibullin were killed on July 8 over the city of Palmyra, Homs province, flying the Syrian Mi-25 helicopter (an export version of Mi-24) with a load of ammunition. The helicopter crew attacked militants of the Islamic State terrorist group (IS, outlawed in Russia), that broke through the defense of the Syrian government troops, thus thwarting the IS attack. After running out of ammunition, the helicopter was hit by militants’ gunfire from the ground as it was making a turn and crashed in the area controlled by the Syrian government army. The Russian pilots were put forward for state decorations.

Read more: Why are Russian servicemen still dying in Syria?