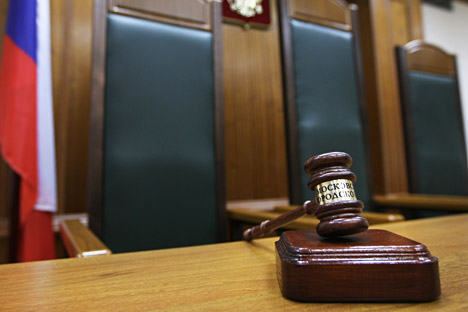 Four judges were killed in Dagestan in 2013. Photo: Judge's chair in the courtroom of Moscow City Court.

Ruslan Krivobok/RIA Novosti
The murdered judge has considered several criminal cases, including on extremism and terrorism.

A criminal case has been opened into the murder of a federal judge in Russia’s North Caucasus republic of Dagestan, a spokesman for the local department of the Investigative Committee told TASS on Aug. 11.

An unknown man opened fire at Judge Ubaydulk Magomedov from an automatic gun at around 10:30 p.m. on Aug. 11, investigators said. The judge, who was in a yard near his house in Assab, in Dagestan’s southwestern Shamilsky district, died at the scene.

"The investigators consider that the main reason for the attack was the judge’s professional activity," the spokesman said.

An aide to the chairman of Dagestan’s Supreme Court, Zarema Mamayeva, said the judge had not received any threats. Magomedov had considered several criminal cases, including on extremism and terrorism.

Magomedov was appointed the judge of the Shamilsky district court in 2004.

Four judges were killed in Dagestan in 2013.

Read more: Are driverless cars the next frontier in crime?