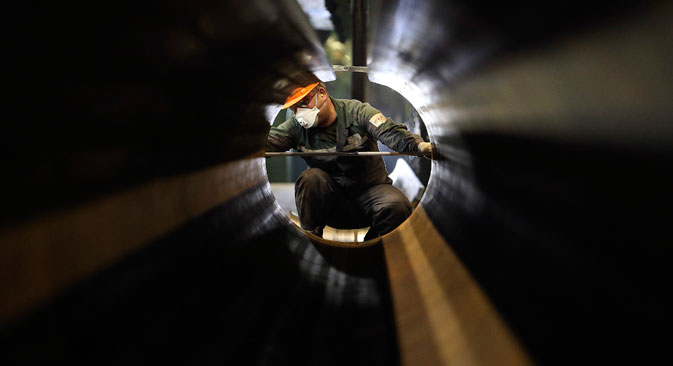 The pipeline is to run 660 km in the old South Stream corridor and 250 km in the new corridor in the direction of the European part of Turkey.

Reuters
'Agreement has been reached regarding its financing on a 50-50 basis,' says Erdogan.

"We told (the Russian side) that there are no problems with the Turkish Stream project. The only thing is that we’ve proposed to divide expenses on the construction of the pipeline’s section crossing our territory into halves," Turkish President said, adding that outside Turkey gas will be transported through the Black Sea.

"As for the remaining part a (preliminary) agreement has been reached regarding its financing on a 50-50 basis," Erdogan said. The decision to resume the Turkish Stream pipeline project followed the talks of presidents of Turkey and Russia on August 9 in St. Petersburg.

The Russian authorities announced the launch of the Turkish Stream pipeline in December 2014 as an alternative to the South Stream gas pipeline project abandoned by Russia over the EU’s demand to bring it to conformity with the so-called Third Energy Package despite the fact that it does not belong to intra-European gas infrastructure. However, the Turkish Stream was put on hold as relations between Russia and Turkey got locked in a spat over the downing of a Russian Su-24M bomber on November 24 by the Turkish Air Force’s fighter jet.

It was planned that the marine section of Turkish Stream would comprise four lines with the capacity of 15.75 bln cubic meters each. The pipeline is to run 660 km in the old South Stream corridor and 250 km in the new corridor in the direction of the European part of Turkey.