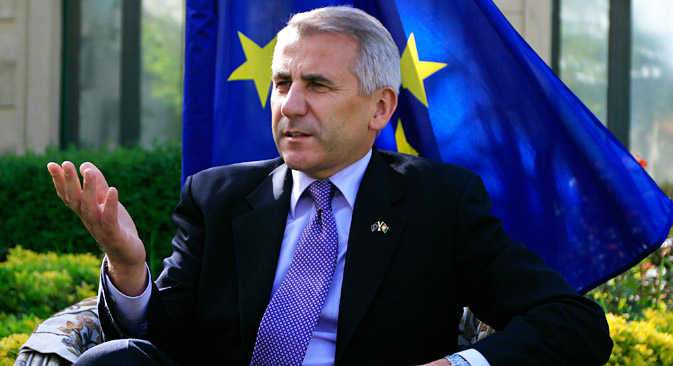 "Detailed explanations have been given to Usackas regarding an attempt to carry out terror attacks in Crimea," says Russian MFA. Photo: EU Ambassador to Russia Vygaudas Usackas. Source: Reuters.

Russian First Deputy Foreign Minister meets the EU’s Ambassador to Russia to talk about the incident in Crimea.

Russian First Deputy Foreign Minister Vladimir Titov has given explanations to Vygaudas Usackas, the EU’s Ambassador to Russia, concerning the alleged attempts to carry out terrorist attacks in Crimea of which employees of the Ukrainian Defense Ministry have been accused, the Russian Foreign Ministry said on Aug. 12.

"During the conversation, the two sides discussed topical issues related to European security, cooperation between Russia and the European Union and a number of international problems, including the situation in Syria and Ukraine," the ministry said.

"Detailed explanations have been given to Usackas regarding an attempt to carry out terror attacks in Crimea made by employees of the Ukrainian Defense Ministry that have been thwarted by Russia’s competent agencies," the ministry said.

TASS reported earlier that Ukrainian and Russian citizens who provided assistance in plotting terrorist attacks had been detained in Crimea.

According to the FSB, one of the organizers of the planned terrorist attacks was Yevgeny Panov, a resident of Ukraine’s Zaporozhye region born in 1977, an employee of the Ukrainian Defense Ministry’s main intelligence directorate who was detained as well and is giving a confession.

The Russian Federal Security Service said on Aug. 10 that it had detained a group of Ukrainian saboteurs overnight to Aug. 7 near the city of Armyansk (Crimea) and that it had prevented terrorist attacks in Crimea prepared by the Ukrainian Defense Ministry’s main intelligence directorate. Their planned targets were critically important infrastructure and life support facilities.

Russian President Vladimir Putin called the Ukrainian special services’ attempt at an act of sabotage in Crimea silly and criminal, saying that the real purpose was to distract attention from Ukraine’s internal problems.

Ukrainian President Pyotr Poroshenko and the Ukrainian Foreign Ministry repudiated Moscow’s statements describing the detention of saboteurs in Crimea as a provocation.