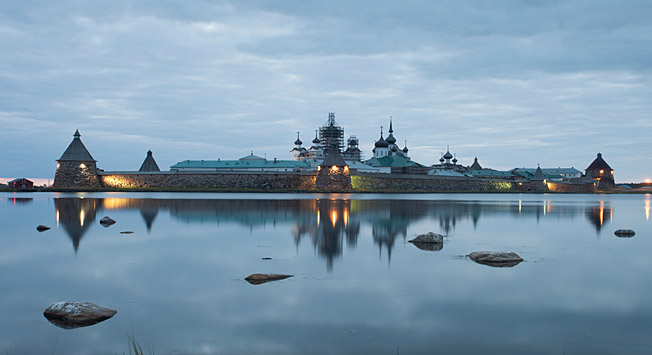 Renovating the Solovetsky monastery, a UNESCO World Heritage site in northern Russia, carries a price tag of six billion rubles, or around $9 million, and would have 68 cultural heritage sites within the complex restored by 2020, the Russian Minister of Culture Vladimir Medinsky said on Aug. 24.

The minister also said that "in the past four years the federal budget has provided 2,268 billion rubles (about $3.5 million) for the preservation of the Solovetsky islands’ heritage sites".

Web-Doc: The memory of the Solovetsky islands

Medinsky noted that in 1992 the Solovetsky monastery museum and conservation area was placed on the UNESCO’s World Heritage List and in 1995 it was included in the State Collection of particularly valuable heritage sites of the peoples of Russia.

"The museum site is the principal employer and mainstay of the entire Solovetsky settlement, the population of which is less than 1,000. In fact, one in three adults in the settlement works at the museum", the minister said.

He informed that the Ministry of Culture has begun the construction of a new museum building outside of the monastery’s walls. Initially a project for a three-story building had been approved, but in July 2015 representatives from the International Council on Monuments and Sites (ICOMOS) Advisory Commission’s visited the Solovetsky islands, and "they issued a recommendation to reject the museum project since it may pose threat to the prominent universal value of the Solovetsky islands’ heritage sites", Medinsky said.

The Russian Ministry of Culture has already made changes in the architectural design of the proposed new museum building. "Instead of a 9.6 meters high three-story building with about 7,000 square meters of space we will build a 7.1-meter-high two-story building, the space of which is going to be 4,800 square meters", Medinsky said.

"The World Heritage Center is currently considering our proposals. According to the Russian Foreign Ministry the answer is due in September. We plan to decorate the fa·ade of the building in the same style that the monastery’s walls are built; they are made of big stones. In short, the appearance of the building will not harm the monastery complex at all", Medinsky said.

He added that "a prominent universal value certainly must be preserved, we fully understand that and we are trying to achieve this goal."

From the Golden Ring to the Solovetsky Islands: Russia's UNESCO treasures>>>