U.S. Ambassador to Russia: Culture can ‘help us to put right our relations’ 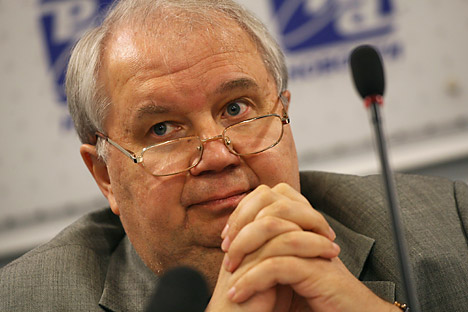 Arkady Kolybalov / RG
Speaking to RIA Novosti after a gala evening in Washington, D.C. devoted to the great Russian writer Leo Tolstoy, Sergei Kislyak expressed his faith that the cultural ties between the two nations could help to rectify soured bilateral relations.

Culture and cultural ties can form the basis for an improvement in relations between Russia and the United States, Russian Ambassador Sergei Kislyak told the RIA Novosti news agency after a grand gala in honor of the great Russian writer Leo Tolstoy on Dec. 7 in Washington, D.C.

“I have strong faith that culture and cultural ties can help us to put right our relations,” said Kislyak at the end of the event.

The event was the 24th evening of its kind held by the American-Russian Cultural Cooperation Foundation. Each meeting, held twice a year, is devoted to a person or phenomenon that laid an impact on the two countries’ cultures.

The Life and Philosophy of Leo Tolstoy in 15 Photos

During the evening reception, which took place at the Washington club Cosmos, audiences were presented with a fresh view of Tolstoy’s work, conveyed through music, ballet, singing and readings of excerpts from his prose and personal correspondence.

The evening began with a number presented by the Akhmedova Ballet Academy. After a congratulatory speech on behalf of all the organizers by the head of the fund Eugen K. Lawson, the audience was presented with a number of reports and lectures about Leo Tolstoy’s life.

A speech by Professor Andrew Kaufman of the University of Virginia gave a special flavor to the event and was received with a standing applause from the audience.

A significant part of the event was focused on the correspondence Tolstoy held with American friends, which was presented by the archive of the Moscow State Leo Tolstoy Museum (the documents date back to the first decade of the 20th century).

Both ordinary Americans and great scientists corresponded with Tolstoy – including Thomas Edison. Interestingly, it is thanks to Tolstoy’s friendship with Edison that we now have the recording of his voice, which was one of the first to be recorded on the phonograph invented by the American 130 years ago.