Russia and UAE to start working on 5th generation fighter 2018 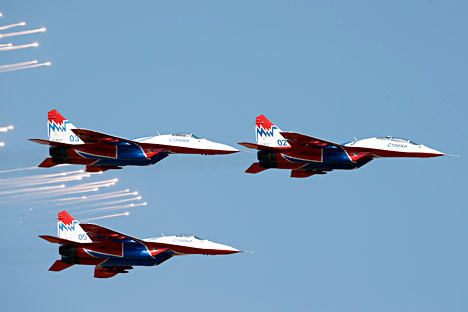 Russia and the United Arab Emirates will get down to joint work on a future light 5th generation jet on the basis of MiG-29 as of 2018, the chief of Russia’s Rostec corporation, Sergey Chemezov, told the media on Feb. 20.

"We believe we shall start working on this plane as of next year. It will take seven to eight years to develop," Chemezov said on the sidelines of the international weapons show IDEX-2017.

"A future fifth generation plane will be created on the basis of Russia’s Mig-29," he added.

Earlier, Russian Industry and Trade Minister Denis Manturov said that Russia and the UAE had concluded an agreement on industrial cooperation in military engineering, which enabled them to launch a fifth generation fighter project.

The head of the United Aircraft Corporation Yuri Slyusar said the work on the plane was at the initial phase and Russia was in the process of drafting proposals. The UAC would participate in the project as the leader organization, and Sukhoi and MiG as co-contributors.