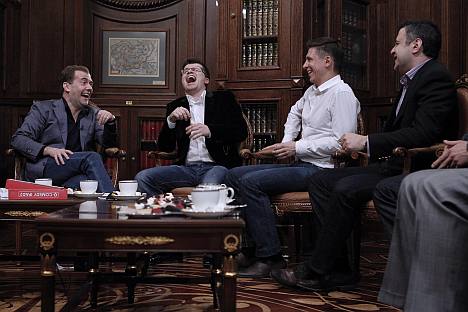 TASS
'Huray! At last, they have found Russia's most dangerous weapon!'

The Russian mission to NATO has passed a sarcastic comment on NATO's plans to scrutinize the capabilieis of Russian political talk shows and comic shows, including the highly popular Club of the Funny and Inventive People (Russian acronym KVN) as instruments of strategic communications and psychological warfare.

"Huray! At last, they have found Russia's most dangerous weapon!" the mission twittered om March 15 evening. "It's a big wonder how much money and time these studies took up."

StratCom, an analytical center reporting to NATO and based in eastern Baltics, said earlier it would hold a discussion 'StratCom Laughs: In a Search for an Analytical Framework' in Riga on March 17.

NATO scholars and researchers will consider the reports, one analyzing the essence of nighttime political shows on Russia's Pervy channel, the second focusing on the KVN and the third highlighting the use of comic shows by Ukrainian TV "to de-stress the audiences during the Russian aggression of 2014 to 2016."

Participants in the discussions are expected to give special attention what the organizers of the conference believe to be the discrediting of European political leaders in the Russian TV shows.

NATO launched StratCom, initially an invention of the former Soviet Baltic republics and Poland, in 2014. Germany, Italy and Britain joined the initiative later on. The scope of the body's tasks includes the scrutiny of Russian "information campaigns" in the Baltic countries and the interpretation of the events of World War II in Russian research works and politics. The phrase 'strategic communications' is strictly synonymous with propaganda and psychotronic warfare in NATO's vocabulary.