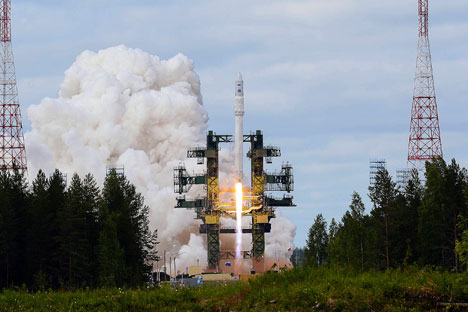 The heavy Angara-A5V and Angara-A5P carrier rockets are planned for delivering Federatsiya spacecraft into orbit.

"It is in the active stage of work. Actually all design documentation has been issued and we are now producing separate assembly units," he said.

The first Federatsiya spacecraft is designed for a flight into a low-Earth orbit, he added.

The Federatsiya spacecraft will be 80 percent made of composite materials and the descent vehicle of aluminum, he said.

"If we take totally all materials it is made of, composites will account for 80 percent. The question is what the descent vehicle, i.e. the capsule that returns cosmonauts to the Earth, should be made of. Today we are working with aluminum. Moreover, this is a new alloy, 1570S, absolutely new with improved characteristics, which will allow reduce the spacecraft’s weight and help pare off dynamic loads," Solntsev said.

Roscosmos is recruiting brave men and women for moon mission

But simultaneously it is important not only to produce the spacecraft but also to make it competitive, Solntsev said.

The spacecraft Federatsiya designed by the Energiya Space Rocket Corporation is intended for delivering humans and cargoes to the near-Earth orbit and to the Moon. Its crew will comprise up to four members. The spacecraft will have an endurance of up to 30 days and up to twelve months as part of an orbital station.

The heavy Angara-A5V and Angara-A5P carrier rockets are planned for delivering Federatsiya spacecraft into orbit.

The first unmanned launch of the Federatsiya space vehicle is scheduled for 2021 and the first manned flight for late 2023.