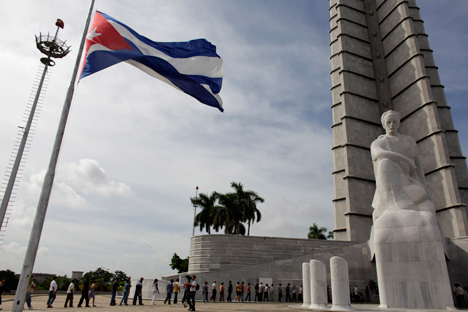 Hurricane Matthew, the most powerful in the Atlantic region since 2007, made landfall in Cuba, Haiti and southeastern U.S. states in early December 2016.

AP
Hurricane Matthew made landfall in Cuba in early December 2016

Russia donated $1.5 million to finance UN-led recovery programs in Cuba following the devastating Hurricane Matthew that hit the Caribbean nation last October. One million U.S. dollars will be allocated to the UN Development Programme (UNDP) and and $500,000 - to the UN Children’s Fund (UNICEF) in Cuba.

The ceremony was held on April 13 local time at the Russian embassy in Havana and was attended by Russian Ambassador Mikhail Kamynin, officials from Cuba’s Foreign and External Trade ministries, as well as UNPD and UNICEF envoys.

The money will be used to fix and rebuild about 2,000 homes in the hardest-hit Guantanamo province, as well as to ensure water supplies and proper sanitary conditions at objects of social infrastructure.

Hurricane Matthew, the most powerful in the Atlantic region since 2007, made landfall in Cuba, Haiti and southeastern U.S. states in early December 2016. Although eastern regions of Cuba suffered major damage in the disaster, there were no human casualties due to timely evacuation of almost 180,000 local residents. Cuba estimates its losses at about $2.5 billion, with some 39,000 buildings destroyed.