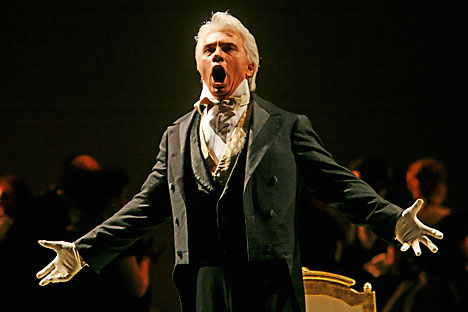 AP
In 2015, Hvorostovsky was diagnosed with a brain tumor

A concert of renowned Russian opera singer Dmitri Hvorostovsky at the National Concert Hall of Dublin (Ireland) on April 29 has been cancelled due to illness of the singer who is fighting a brain tumor.

"Please note that the upcoming concert by baritone Dmitri Hvorostovsky with pianist Ivari Ilja scheduled for Saturday, 29th April 2017 at the National Concert Hall has been cancelled," the concert hall’s website reports.

"Dmitri Hvorostovsky deeply regrets that he must cancel his recital due to a change in the schedule for his cancer treatments," the report said. Information about the concert has also been removed from the singer’s official website.

However, Hvorostovsky’s managers still announce his participation in a gala concert in Toronto (Canada) on April 25.

In late December 2016, Hvorostovsky indefinitely postponed his recitals in Russia’s western city of Kaliningrad and the Belarusian capital of Minsk and cancelled the March 7 concert in Austria’s capital of Vienna for health reasons.

In a message published on his website, the singer expressed his regret over the decision but also said that "right now I must follow doctors’ orders and focus on my recovery."

In the summer of 2015, Hvorostovsky was diagnosed with a brain tumor. Despite getting medical treatment, he continued performing, in particular, he went on a North America tour and performed the Songs of the Wartime program at the Green theatre at the VDNH complex in Moscow. However, in late September 2016, the singer had to withdraw from his engagements in Verdi’s Simon Boccanegra at the Vienna State Opera while in December 2016, he cancelled his planned debut performances of Verdi’s Don Carlos at Moscow’s Bolshoi Theater.