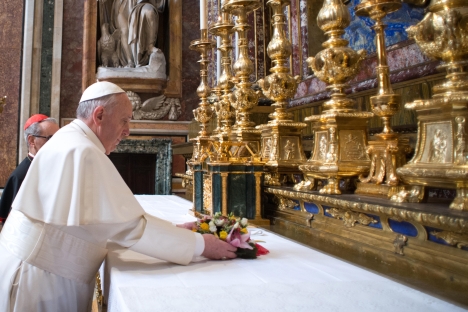 Pope Francis I and the heads of Eastern Orthodox Churches are trying to find a way to unify the dates of Easter for all Christians. The Pontif revealed it on April 29, while answering questions from repoters of the Vatican pool when he was en route to Rome from Cairo where he had had talks with Tawadros II, the Patriarch of the Coptic Church.

"I have long-time friendship with Patriarch Tawadros," Francis I said. "He is leading his Church ahead and carrying Christ's name and he is a staunch supporter of the idea of appointing a unified date of the Easter, even a greater supporter than myself. And we're trying to find a way to do it.

A unified Easter for Western and Eastern Christians is one of the provisions of the Cairo Declaration that Francis I and Tawadros II signed upon the completion of their talks.

This is far from the first time that Pope Francis comes up with the idea of unifying the feast of Easter for all the Christians and it is an item of his ecumenical doctrine.

Easter’s East-West divide: What are the differences?
Since the global community of Eastern Christians calculates the Paschal (Easter) cycle on the basis of the Julian calendar and Western Christians do it on the basis of the Gregorian calendar, the time gap between Pascha and Easter may vary from just a few days to almost a month. In some years, however, Pascha and Easter coincide, like they did in 2017.

"During this trip, we had an ecumenical meeting, as the Patriarch of Constantinople Bartholomew, an archbishop of the Georgian Orthodox Church, and some other Eastern Orthodox hierarchs came to Cairo, too," said the Pope who had been invited to Egypt to attend an international conference on peace hosted by the biggest Islamic university Al-Azhar.

"Ecumenism can be promulgated only if all of us move forward together," Francis I said. "Partial ecumenism doesn't exist."

"Quite naturally, theologians should scrutinize the issues, which continue causing discrepancies, yet this won't lead up to anything until we begin to move forward together," he said. "The only thing we can do now is to pray, work and do good but necessarily together.