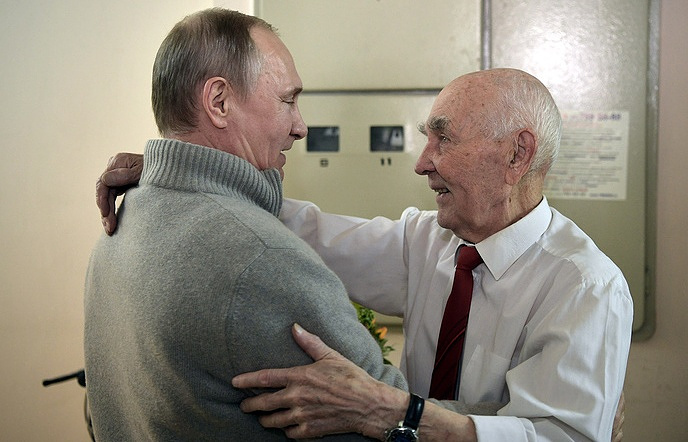 Russian President Vladimir Putin has visited former KGB representative to the Ministry for State Security of the German Democratic Republic (GDR) Lazar Matveyev, who used to be his chief when Putin worked at the KGB office in Dresden in the 1980s. The president took advantage of the opportunity to congratulate his former chief on his 90th birthday.

Putin was accompanied by two people who were his colleagues during his years in the GDR - Nikolai Tokarev, who now heads the state-owned oil pipeline company Transneft, and Sergey Chemezov, CEO of the Rostec state corporation.

The president wished Matveyev a happy birthday and also congratulated him on the upcoming Victory Day. Putin presented his former chief with a presidential watch and an issue of the Pravda newspaper published on the day of Matveyev’s birth in 1927.

According to the information available on the Kremlin website, in 1985-1990, Vladimir Putin served at KGB’s intelligence office in Dresden, East Germany.

"Over the course of his service, he was promoted to the rank of lieutenant colonel and to the position of senior assistant to the head of the department. In 1989, he was awarded the bronze medal issued in the German Democratic Republic, For Faithful Service to the National People’s Army," the website adds.

The president himself said in an autobiography titled First Person that "the work was political intelligence."

"The usual intelligence activities: recruiting sources of information, obtaining information, analyzing it and sending it to Moscow," he elaborated. Putin "looked for information about political parties, the tendencies inside these parties, their leaders."

"I examined today’s leaders and the possible leaders of tomorrow and the promotion of people to certain posts in the parties and the government," Putin added.

"It was important to know who was doing what and how, what was going on in the Foreign Ministry of a particular country, how they were constructing their policies on certain issues and the various areas of the world, and how our partners would react in disarmament talks," he said.

According to Putin, "in order to obtain such information, you need sources." "So recruitment of sources, procurement of information and assessment and analysis were big parts of the job. It was very routine work," he added.