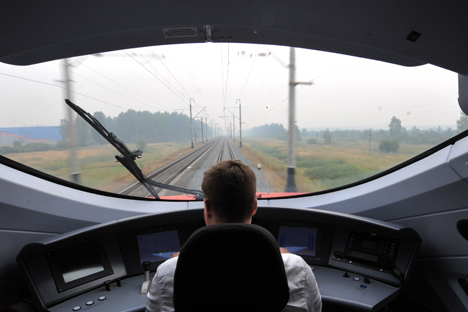 The high-speed journey from Moscow to Kazan will take 3.5 hours compared to the current 14 hours.

"We have passed over our terms to them: to cut the interest rate and increase the loan value," he said. The final parameters should be determined by the Chinese side, Misharin added.

Before that, the Russian and Chinese sides discussed a loan of 400 billion rubles ($6.9 billion at the current exchange rate) at 4 percent per annum for 20 years to finance the fast-speed rail link construction.

The Russian Railways first vice-president earlier said that the Moscow-Kazan fast-speed rail link construction was estimated at 1.260 trillion rubles ($21.7 billion). The Moscow-Kazan rail stretch may eventually become a part of the Moscow-Beijing fast-speed railroad whose construction is estimated at 7 trillion rubles ($120 billion) and the Silk Road project intended to link China with markets in Europe and the Middle East.

As Russian Railways President Oleg Belozerov said, the fast-speed rail link may be launched into operation before 2022-2023.

China intends to provide a 400 billion-ruble loan for the Moscow-Kazan fast-speed rail link project for 20 years along with over 100 billion rubles as a contribution to the authorized capital of a special purpose company.

The Moscow-Kazan fast-speed rail link will be about 770 km long, with trains expected to move at a speed of 400 km/hr and stops every 50-70 km. The high-speed journey from Moscow to Kazan will take 3.5 hours compared to the current 14 hours.