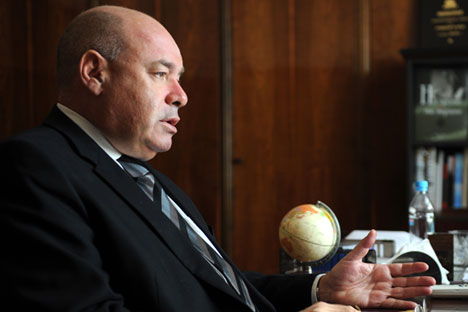 RIA Novosti / Grogoriy Sisoev
There have been vast contacts in culture, science 'that benefit both sides'

In defiance of political tensions the people of Russia and the United States maintain close relations in science and culture, Russian presidential representative for international cultural cooperation Mikhail Shvydkoi told TASS on the sidelines of the Fort Ross Dialog conference on May 29.

"Despite the current twists and turns and the extraordinary suspiciousness towards Russians (in the United States) Russian culture and Russian art are permanently present in the United States. Just as American culture is present in Russia regardless of the anti-U.S. rhetoric. The cinema is represented very widely. One should remember that… There have been vast contacts in culture and those spheres of science that benefit both sides, in the first place, cooperation in space and nuclear power," Shvydkoi said.

The Fort Ross Dialog is held in Russia for the first time on May 29-30 in the city of Pskov and Izborsk. The first day of the forum is devoted to discussions on ways of preserving cultural ties between the two countries. On the second day the participants will examine the outlook for bilateral cooperation in energy and political issues.